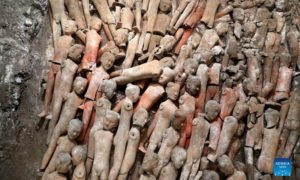 A large-scale mausoleum in Xi’an, capital of northwest China’s Shaanxi Province, has been identified as belonging to Emperor Wendi of the Western Han Dynasty (202 BC-AD 25), local authorities said Tuesday.

The mausoleum, located in Jiangcun Village on the eastern outskirts of Xi’an, is surrounded by more than 100 ancient tombs and outer burial pits. Excavation has been carried out in the area since 2017, with numerous relics unearthed including dressed pottery figurines, crossbows, and official seals.

The mausoleum has no grave mound, and there are four ramps leading to the entrance of the burial chamber placed 2 to 4.5 meters underground. The chamber, with its base 27 to 30 meters below the ground, is 74.5 meters long and 71.5 meters wide.

The mausoleum is similar to those of the other two Western Han Dynasty emperors in terms of structure and scale, with traces of historical evolutions, said Ma Yongying, a researcher with Shaanxi Academy of Archaeology, adding that historical documents also support the archaeologists’ claims.

Rumors had it that Emperor Wendi’s tomb is situated in a nearby location called Fenghuangzui, just north of Jiangcun Village.

The discovery of the mausoleum puts an end to this long-running rumor which emerged due to the discovery of an ancient stone tablet with inscriptions in Fenghuangzui.

However, archaeologists did not find any signs of construction in Fenghuangzui during their investigation and concluded that the area is nothing more than a naturally formed loess ridge.

Emperor Wendi, with the personal name Liu Heng, was famous for his frugality and benevolence. Under his more than 20 years of rule, the dynasty’s economy prospered while the population saw an expansion.

The mausoleum is among three major archaeological findings unveiled by the National Cultural Heritage Administration (NCHA) in Beijing on Tuesday.

The list also includes ruins of a residential area in Luoyang, central China’s Henan Province, which dates back to the Tang Dynasty (618-907). During that period, cities were strictly divided into residential quarters and commercial areas by walls.

The site, measuring 533.6 meters in length and 464.6 meters in width, reflects the traditional Chinese philosophy on city planning, and is of great significance to studying the political system and social life during the dynasty, according to the NCHA.

The other site is a tomb complex located in Wuwei City, northwest China’s Gansu Province, which belonged to the royal families of Tuyuhun, a neighboring kingdom of the Tang empire.

The complex possesses the only well-preserved tomb of the Tuyuhun royals discovered so far. Over 800 pieces of objects including textiles and pottery figurines found in the tomb have been preserved through laboratory methods.