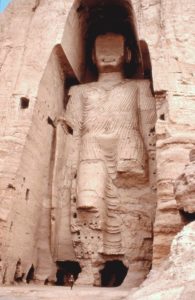 Afghanistan’s new rulers are looting the past—again.
Immediately after storming to power in Afghanistan last August, the Taliban renewed their assault on the country’s rich pre-Islamic heritage by looting archeological treasures in Bamiyan province, in Afghanistan’s central highlands. They zeroed in on the site of the giant Buddhas that, in the Taliban’s first incarnation two decades ago, became an international symbol of the group’s depravity as it declared the 1,400-year-old statues “idolatrous” before proceeding to dynamite them.

One of the men behind one of history’s most heinous cultural crimes was Mullah Abdullah Sarhadi, now the Taliban’s de facto governor of Bamiyan province. Since the Taliban’s return, he has been overseeing the plunder of protected Buddhist antiquities, according to archaeologists and experts with knowledge of destructive activity. He is also implicated in the massacre of Hazaras, who regard Bamiyan as their homeland, dating back to the last time the Taliban ruled, from 1996-2001.

“The looting and destruction, and the construction of some new commercial buildings at the cultural heritage sites began in the days after the Taliban takeover” on Aug. 15 of last year, said Ali Folladwand, a Hazara activist now living in exile who launched a global campaign with the Twitter hashtag #SaveBamiyanHistoricalHeritage.

“We want UNESCO, and other organizations and the countries that really care about world heritage sites to press the Taliban in any way possible to save the cultural heritage of Bamiyan,” Folladwand said. “At the very least, the world should prevent more destruction.”

The Taliban aren’t just blowing up Buddhas and robbing caves. They are assaulting the Hazara people, Shiites who account for about 10 percent of Afghanistan’s population of an estimated 38 million and regard themselves as guardians of the region’s heritage.

Thousands of Hazaras were killed in Bamiyan and elsewhere in the country after the Taliban took power after the civil war in 1996, and many say that a “genocide” dating back to the late 19th century under King Abdur Rahman Khan continues. Folladwand, who was studying medicine until last August and now lives in exile, said the destruction of Bamiyan’s heritage is part of the Taliban’s “cultural cleansing” policy toward Hazaras, who they regard as apostate. In recent years, Hazaras have been killed in their homes, schools, and mosques, though since the Taliban retook control those atrocities have been increasingly claimed by their rival terrorist group, the local Islamic State branch known as Islamic State-Khorasan.

“The physical destruction of heritage gives the Taliban the power to reject the Hazara, classify them as unimportant and erase them for the future generations,” Folladwand said.

Once the Taliban were back in power, they went straight back to dismantling and looting the historic sites. Locals said that Sarhadi brought in non-Afghans to do much of the excavation and looting. The Art Newspaper reported that at least two sites around the giant Buddha niches were excavated, including some caves that had never been opened before. It is impossible to know what they might have held and what, if anything, was taken. Taliban spokesmen didn’t respond to requests for comment, though some sources said Sarhadi had been ordered by Taliban officials in Kabul to cease the unilateral excavation.

The Taliban are simply going back to the scene of the crime. A former UNESCO official, who spoke on condition that he not be identified for the safety of family still in Afghanistan, said Taliban figures involved in the 2001 destruction of the Buddhas, known as Salsal and Shahmama, also looted many artifacts while outside demolition experts prepared the Buddhas for destruction.

“They looted and sold many of the treasures and artifacts of Bamiyan on the black market, and now [Sarhadi] is back to complete his mission,” the former UNESCO official said. “They have started excavating very specific areas around the historical sites of Bamiyan.”