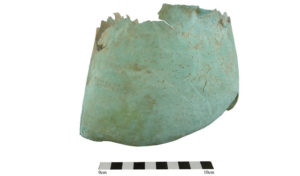 The Department of Conservation and Archaeology of the National Authority of Preah Vihear unearthed a metal artifact dating back to the 12th century.

The news of the discovery was announced on the afternoon of May 22. The artifact was said to e some from of metal pot and was unearthed near the small temple at the foot of the temple of Preah Vihear in the second protected area.

Kong Puthikar, Director General of the National Authority of Preah Vihear, said that the artifacts were unearthed by the professionals on May 20. The artifacts were a body of a metal vase measuring 12 cm high. There were also inscriptions, which linguists identified as a letter in the late 12th century during the reign of Jayavarman VII.

The artifact is an offering to the god Pheay Sachyakuru. The discovery of the metal instrument is an important data in the study of the school in the area of ​​the temple of Preah Vihear, also to be stored and displayed in the Museum of Natural Nature Samdech Techo Hun Sen Preah Vihear.