The White Horse Temple is a Buddhist temple located not far from Luoyang, Henan, in China. This temple is reputed to be the first Buddhist temple in China, as, according to tradition, it was built during the Eastern Han Dynasty. The temple has survived for almost 2000 years. Over this period of time new buildings were added to the temple complex, whilst reconstructions and restorations were made on the older ones.
The Arrival of Buddhist Monks in Luoyang 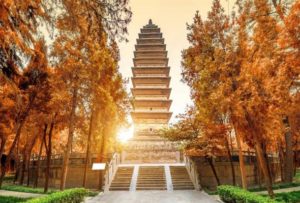 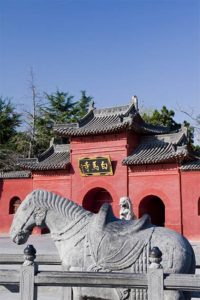 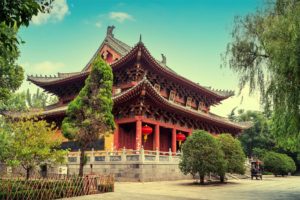 The White Horse Temple is situated about 12 km (7.5 mi) to the east of Luoyang, in the central-eastern Chinese province of Henan. Tradition has it that the temple was established in 68 AD, during the reign of Emperor Ming of the Eastern Han Dynasty. For years prior to the temple’s founding, the emperor had sent two ambassadors to the Western Regions to collect Buddhist sutras . When the ambassadors returned to Luoyang, the Eastern Han capital, four years later, they brought with them not only Buddhist sutras, but also many Buddhist statues , and even two Buddhist monks. The emperor was extremely delighted, and ordered a temple to be built to house the monks, and to store the sutras and statues.

Since the sutras and statues were transported on the back of white horses, the emperor decided to honour the animal by naming the temple the White Horse Temple. A pair of stone horses can be seen at the entrance of the temple. The statues are actually from a much later period known as the Northern Song Dynasty, which ruled China about a millennium after the White Horse Temple was founded. The pair of stone horses most likely represent the white horses who brought the sacred Buddhist objects back to China. It has been noted that the statues display a sad countenance, perhaps due to the solemnity associated with the task they were given.

The White Horse Temple faces south and can be divided into three parts: the main temple, the western area of the temple complex, and its eastern area. Naturally, the main temple is the central attraction of the White Horse Temple, and is consists of five separate halls. Unlike most of the other parts of the temple complex, the structures in the western area were built in more recent times. This area is known also as the Foreign Temple Complex or the International Zone, where several foreign Buddhist temples can be seen. As for the temple’s eastern area, its highlight is the Qiyun Pagoda, which dates to the 12th century.
The Five Halls of the White Horse Temple

Although the Hall of the Great Buddha is the temple’s main hall, the largest and grandest of the White Horse Temple’s halls is the Hall of Mahavira, which covers an area of 22.8 m (74.8 ft) by 14.2 m (46.6 ft). The ceiling of the hall is adorned with colourful lotus patterns, under which is a two-storey shrine covered in carvings of dragons and birds. This shrine is also surrounded by 10,000 small Buddha carvings on the walls. Although there are many statues in the Hall of Mahavira, the three most prominent ones are those of the Sakyamuni Buddha, the Amitabha Buddha, and the Medicine Buddha. These three Buddhas are the central figures of the altar and they are surrounded by the 18 arhats. These statues, which are made of silk and hemp, date to the Yuan Dynasty, and are considered to be invaluable treasures.

By contrast, the smallest hall in the White Horse Temple is the Hall of Guidance. The main buddha worshipped here is the Amitabha Buddha, who is believed to lead his devotees to the Western Paradise after their deaths. The statue of the Amitabha Buddha is flanked by the Bodhisattva of Moonlight and the Goddess of Mercy, both of whom are also associated with the Western Paradise . These two statues are made of clay and date to the Qing Dynasty.

Like the statues of the 18 arhats in the Hall of Mahavira, the Hall of the Heavenly Kings also dates to the Yuan Dynasty . The main focus of this hall is the statue of Maitreya, known also as the Laughing Buddha in China. According to a legend, this buddha was once incarnated as a beggar monk who possessed a purse that contained all the treasures of the world. Indeed, in Chinese culture, Maitreya is closely connected with contentment and abundance. Although the hall was built during the Yuan Dynasty, additions were made during the Qing Dynasty. This is seen, for instance, in the shrine above the statue of Maitreya. This is a large, gilded wooden shrine, with 50 dragons carved onto it. The statues of the Four Heavenly Kings, from whom the hall acquired its name, were also made during the Qing Dynasty.

The last of these five halls is the Cool Clear Terrace, which is a brick terrace located in the yard at the rear of the main temple. In spite of its location, this is arguably the most significant hall in the temple, as it was here that the Buddhist sutras and statues were first stored when they brought back from the Western Regions. Additionally, it was here that the two monks translated the sutras into the Chinese language, and hence may be considered as the birthplace of Chinese Buddhism.

As mentioned earlier, the western area of the White Horse Temple is known as the Foreign Temple Complex or the International Zone, and was built in more recent times. This area contains three “foreign” temples – the India Temple, the Myanmar Temple , and the Thailand Temple. Each of these temples contains distinctive architectural features of Buddhist buildings from their respective countries. For example, the Great Buddha Hall, which is the main building of the India Temple, was modelled after the Great Stupa at Sanchi , whilst the main building of the Myanmar Temple was inspired by the Shwedagon Pagoda in Yangon.

Finally, in contrast to the modern buildings in the Foreign Temple Complex, the Qiyun Pagoda in the eastern area of the White Horse Temple was constructed in 69 AD. The original, Eastern Han pagoda, however, was destroyed at some point of time, and was subsequently rebuilt. The pagoda that visitors to the temple would see today dates to the Jin Dynasty, and was built in 1175. The Qiyun Pagoda is reputed to be the oldest pagoda in China. Despite this claim to fame, however, the pagoda does not receive as many visitors as the main temple, making it an ideal spot for those who wish to enjoy some peace and quiet. Lastly, there is a curious phenomenon that can be experienced at the Qiyun Pagoda. If one were to clap one’s hands whilst standing 20 m (66 ft) to the back of the pagoda, the resulting echo would sound like a croaking frog.