Bramha, Vishnu and Ganesh rub shoulders with the Buddha in Thailand’s multi-layered culture 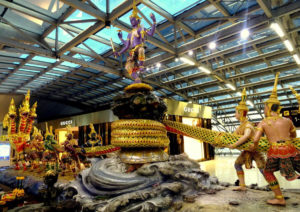 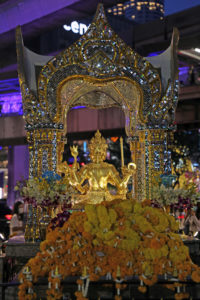 Visitors from Nepal and India at Bangkok’s Suvarnabhumi Airport are surprised to see a 15m long depiction of Hindu gods and demons churning the ocean to squeeze out the अमृत Elixir.

In another section of the terminal building is an ornate figure of Thotsakan almost touching the glass ceiling. This is the Thai name of Ravana, the King of Lanka in the Ramayana. The name of the airport itself, सुवर्णभूमि, means ‘The Golden Land’ in Sanskrit.

Across Thailand, the many wat abound with images of Hindu deities even within Buddhist shrines. The architectural grammar and ornate structures hark back to the temples of the subcontinent, hinting at cultural influences that can be traced to the past millennium.

Thailand’s current King Vajiralongkorn is also known as Rama X, and the Chakri Dynasty’s coronations are still conducted by Hindu Brahmin priests. Some historians have linked the monarchy to southern India’s Chola Dynasty, which during its heydays in the 11th century had spread to southeast Asia.

There are many reminders of Thailand’s Hindu antecedents in place names and religious terms. The Thai Ramayana รามเกียรติ์ (Ramakien) is derived from the Hindu epic. Bangkok’s many shrines are dedicated to Hindu gods, like Wat Khaek, Wat Witsanu for Vishnu the protector, the Erawan Shrine for Brahma, the creator. There are also shrines for Laxmi, Trimurti and Ganesh side-by-side with the Buddhist wat.

Thailand is the largest Buddhist country in the world, with 95% of its 69 million population following the religion. Those who consider themselves of the Hindu faith constitute just 0.03% percent of Thais (22,100 people) according to the 2015 census.

Despite the very small number of Hindus here, elements of Hinduism permeate Thailand’s socio-cultural life. Even as the group is a minority, various Hindu elements remain deeply embedded in the traditional culture and social life of the Thai people.

Hinduism arrived in Thailand partly along the land route from India via Burma, but also traversed the Bay of Bengal to Indonesia and was instrumental in the establishment of the maritime Sri Vijaya Empire. It is from Java that Hinduism also spread to Cambodia, and what is now Vietnam and northwards to Thailand – absorbing local cultural elements along the way.

Waves of invasions, and especially the Khmer rule, left the residue of Hinduism in the Thai culture. And as is often the case with external influences, the elements have been absorbed and overlaid with Buddhist rituals seamlessly, giving them Thai characteristics.

Alongside their Buddhist beliefs, many Thais worship Hindu deities. One of them is the Brahma (Phra Phrom) at the famous Erawan Shrine in Bangkok. People in deep anguish are known to go to this shrine, and when a wish has been granted, devotees hire dancers to perform Ram Kae Bon, to thank the god.

Statues of Ganesh, Indra (Phra In), and Shiva (Phra Isuan) can be found across Thailand. Ganesh is known as Phra Phikanet in Thai and is worshipped as the remover of obstacles. He is the deity Thai Buddhists often pray to before they start an important venture — just as Hindus in Nepal and India do at Ganesh temples.

It is not uncommon to see offerings being placed before the shrines of Ganesh, in the form of miniature elephants, garlands of fresh flowers, bananas or other fruits. Ganesh becomes a deity of significance, also because elephants are viewed as the national animal and mascot.

Numerous relics on temple walls, such as at Prasat Hin Phima in Korat, describe the episode of Krishna hunting wild boars. The temple, one of the biggest Hindu temples in Thailand, also carries evidence of Buddhist and animist influences, like many other historical monuments in Thailand do.

The influence of Hinduism can also be seen on Thai art and literature. Ancient theatrical practices are based on the epic Ramkien รามเกียรติ์, which is based on the Ramayana. Thailand’s former capital Ayutthaya has its name derived from Ayodhya, the birthplace of Ram in India, close to the Nepal border. Streets in different parts of Thailand also bear the name Rama, named after the deity.

There are Thai variations on a lot of other names from the Ramayana. Tosarot is Dasarath, Lord Ram’s father. Sita is also revered in Thailand as Sida สีดา .

It is believed that the hills that stretch across some parts of northern Thailand are the eastern tail-end of the Himalaya. And so, Shiva has a temple dedicated to him in the Issan province in northern Thailand on the Laos border. The word Issan itself comes from the Thai name for Shiva, Isuan อิซวน, which could be derived from the Sanskrit इष्वर.

U Thant, Kenzō Tange and the Buddha’s birthplace, Kunda Dixit
Thai epic Ramkien, which is based on the Ramayana, has inspired Thai art and literature.

The royal household of Thailand has given continuity to the Hindu traditions that have been in their families for centuries. Thai Royal emblem depicts Garuda, the vahana of Vishnu (Phra Narai), while Brahm Luang (Royal Brahmins) continue to be assigned the duty of engaging with the royalty to lead funerals, weddings and state ceremonies. This includes the Royal Ploughing Ceremony to ensure a bountiful harvest.

The late Thai monarch, King Bhumibol Adulyadej, was an ardent reader of the Buddhist and Hindu scriptures. He also recreated some of the stories through his own research. He was particularly enthused by the life of King Janak and his benign ways as the leader of a country. He is known to have sent his researchers to Janakpur, Nepal, for their own reading of the ancient kingdom of Vidhea, part of which is now known as Janakpur.

King Bhumibol wrote the book The Story of Mahajanaka, which has been translated into English and Nepali. His daughter, Princess Maha Chakkri Sirindhorn, is herself a Sankritist and shares her father’s interest in the King Janak and the Mithila Kingdom that once straddled India and Nepal.

The Hindu roots of Thai culture are also evident at the temple of Devasathan, which was established in 1784 in the Pra Nakhon district of Bangkok by King Rama I. The temple with its Sanskrit name which means ‘abode of god’, is also known as the ‘Brahmin temple’. It is believed to be home to the descendants of priests who came from India’s Tamil Nadu during the Chola period 1,000 years ago, who still perform ceremonies for the royalty every year.

The right path, Nepali Times
The depiction of the account in the Hindu scriptures of the churning of the ocean to extract the elixir of immortality at Bangkok’s Suvarnabhumi Airport. Photo: @jaya_nayagam

Historically, numerous theories have been offered to account for the spread of Hinduism in Thailand, but it is generally agreed that the religion infiltrated the region in a series of waves affecting different places at different times. Between the 1st and 5th centuries the northeast was strongly influenced by the Hinduised kingdom of Nokor Phnom (or Funan as it was known to the Chinese).

From 802–1431 CE, Hinduism was further absorbed through the expansion of the hybrid Hindu-Buddhist Khmer Empire. Meanwhile the northern and central regions were heavily influenced by Hinduism during the Dvarvati period between the 6th and 11th centuries. While Buddhism was the major religion at the time, the presence of Hinduism shows prominently in the presence of statues of Hindu deities that scattered across the region during the time.

In the central plains of Thailand, it is thought that Hinduism may have arrived even earlier, directly from Amravati in India or through the Mon people based in Burma. The Mon people were responsible for exporting their influence in terms of language and culture to much of Southeast Asia.

The south, too, seems to have been directly linked to India, with evidence of trade and migration as early as the 1st century CE, but the region was particularly influenced by the Pallava cultures of Southeast Asia, with numerous traits of the Hinduised Buddhist kingdom of Srivijaya in Java and Kalimantan appearing in the area from the 6th century onward.

Just as we see statues of Buddha, and Buddhist shrines next to Hindu temples in Nepal, it is fairly common to see figures of Hindu gods at the many wat in Thailand. And this quiet understanding of co-existence of religion and beliefs among a largely Buddhist people speaks for the name the country bears: the land of freedom.