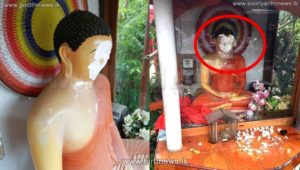 Area residents have captured the two youths when they arrived on a motorbike early Wednesday morning (Dec 26) and attempted to damage a Buddha statue at a road junction in Mawanella and handed them over to the police.

One of the youth has attempted to flee but he was later arrested, the police said.

The villagers have assaulted the other suspect named M. Ashfar, and handed over to the police.

The two youths are suspected of a spate of attacks on Buddha statues recently in the Mawanella area, a police officer told the BBC Sinhala Service.

He said these acts of sabotage were committed with the intention of creating religious tensions among Sinhalese and Muslims.

It has been reported that the security has been beefed up in the Mawanella area and the Special Task Force (STF) police have been deployed in some areas.

Minister Kabir Hashim, who represents Mawanella area in parliament, has issued a statement on his Facebook page saying that the law should be strictly enforced against individuals connected to these incidents.

“I condemn the recent acts of violence committed against places of worship in Mawanella. As soon as I heard about the recent attacks I instructed the police to investigate and arrest those responsible. The two suspects have since been apprehended by the authorities and will be subject to the full extent of the law,” Minister Hashim said.