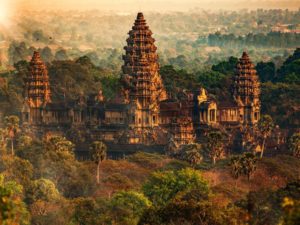 The empire controlled much of mainland Southeast Asia by the beginning of the 10th century A.D., but unclear rules of succession combined with a complicated web of royal family intermarriages led to a crisis. Jayavarman IV, a grandson of a previous king, contested the rule of the leaders in Angkor, the traditional seat of power. In the 920s, he set up a new capital at Koh Ker, about 75 miles to the northeast. Koh Ker flourished until 944 when Jayavarman IV’s son and successor was killed, and the next Khmer king moved the capital back to Angkor.

“It’s a very interesting period in Angkorian history where it looks like you’ve got serious competition for rulership,” says Miriam Stark, director of the Center for Southeast Asian Studies at the University of Hawai’i at Mānoa.

Without this turmoil at the new capital and a move back to Angkor, the grand treasures of Southeast Asia—such as the astounding Angkor Wat and jungle-eaten Ta Prohm—may never have been built in subsequent centuries. Now, a new study published recently in the journal Geoarchaeology shows that there was more than political intrigue at play. A water reservoir critical for large-scale agriculture in the Koh Ker area collapsed around the time the capital moved back to Angkor.

“It provides clues as to what’s going on in the empire during that time,” says Sarah Klassen, director of the Koh Ker Archaeological Project, and a post-doctoral researcher at the University of British Columbia in Vancouver, Canada.

Compared to widely studied societies such as the ancient Egyptians or the Maya, relatively little is known about the Khmer Empire. What scholars have learned about the royal lineage of the empire, which lasted from the beginning of the 9th century A.D. to the empire’s gradual decline starting in the 14th century, mostly comes from inscriptions on temple structures. In recent years, archaeologists like Klassen have begun using new techniques and technologies to learn more about this powerful kingdom.

Klassen and her colleagues completed LiDAR (light detection and ranging) surveys in 2012 at both Koh Ker and Angkor to map aboveground ruins, including an area near a large Khmer reservoir where a chute would have let excess water discharge downstream towards a river. Archaeologists had previously identified a dike and saw that it had broken down at some point. In 2015, they excavated part of this chute area, then returned in 2016 with ground-penetrating radar, which showed that the blocks built to limit the outflow of water had eroded.
A reservoir at modern-day Angkor Wat
A reservoir at modern-day Angkor Wat (Joshua Rapp Learn)

“There were extreme flows of water leading into the dike, and the chute wasn’t large enough to handle that and the whole thing broke,” Klassen says. The researchers believe all this happened in a single event that also wiped out a spillway and would have caused downstream flooding. Klassen speculates that such a flow of water may have damaged the agricultural land downstream.

While the team can’t be sure of the exact date, she says that the water system was likely built under the reign of Jayavarman IV. The evidence suggests the system may have collapsed as early as during the first or second rainy season after the reservoir was filled. “That would have been right around the time when political control was shifting back to Angkor,” Klassen says.

Her team can’t say whether the collapse happened before the move—suggesting it contributed to the collapse of Koh Ker as a capital —or after, meaning it may have been caused by a lack of attention or upkeep after the Khmer power players left town. Stark, who was not involved in Klassen’s study, argues that ultimately the timeline may not matter. What’s important, she says, is that rulers at Koh Ker probably could have fixed the problem if they had the will or the engineers to do so.

Piphal Heng, a post-doctoral archaeology researcher at Northern Illinois University who studies Cambodia but who was not involved in Klassen’s study, says engineered water systems would have allowed Angkorian rulers to accumulate power through rice agriculture and extend their sway through neighboring states. Heng says it remains unclear whether Jayavarman IV’s rule competed with or cooperated with parallel rulers at Angkor. However, it appears that he had control of most of the empire while at Koh Ker. Klassen says the water management feature in Koh Ker would have been the largest in the Khmer Empire at the time, and Heng says this system shows how the new capital would have quickly set about establishing its power base.

Alison Carter, an assistant professor in anthropology who was also not involved in Klassen’s study but has worked with Stark and Heng, said in an email that Cambodia’s monsoon climate means that water availability shifts dramatically throughout the year, and much like today, the ancient Angkorians needed to learn how to manage water in large cities.

“What this study shows is that the people at Koh Ker hadn’t figured out this delicate balance,” she says of Klassen’s work. “In contrast, the people at Angkor seemed to have a better handle on the landscape and engineering needed to sustain a flourishing city there for several centuries.”
Ta Prohm temple in Cambodia, overgrown
Ta Prohm temple in Cambodia, overgrown (Joshua Rapp Learn)

The quick rise and fall of Koh Ker set of a series of events that culminated in the creation of Angkor Wat, one of the most popular tourist destinations in the world.

Once Rajendravarman II moved the capital back to Angkor after the death of Jayavarman IV’s son Harshavarman II in 944, he set about expanding the empire and building temples in the Angkor area. The Khmer Empire grew throughout the next few centuries, with each successive king building more temples. Angkor Wat was built in the 12th century. Later, during the reign of one of the greatest kings, Jayavarman VII, Khmer people built Bayon, Ta Prohm and other temples in the area. They also built increasingly complex water management systems to control the monsoons and consolidate power.

But the empire’s decline in the 1400s may have been foreshadowed by Koh Ker’s demise. A period of extended drought in the late 1300s was followed by floods that may have overwhelmed the water infrastructure of the city, according to research conducted by a team including scientists from this Koh Ker study.

Tegan Hall, a post-doctoral researcher at the University of Melbourne who has worked on Koh Ker (but who wasn’t involved in Klassen’s study), says in an email that while Angkorians tried to mitigate problems with their water system, eventually they could not keep up.

“The water infrastructure system at Angkor was enormous, highly interconnected (and interdependent) and very complex, and was ultimately ruined by a series of cascading failures in response to an increase in climate extremes,” she said.