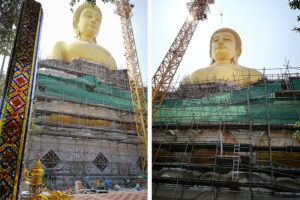 BANGKOK — A gigantic Buddha statue under construction in western Bangkok is set to become the city’s tallest Buddha figure when it is completed later this year.

The 69 meter tall statue – approximately the neck-craning height of a 20-storey building – is being built by followers of the Dhammakaya sect at Wat Paknam Bhasicharoen. Sitting in meditation posture, the massive structure is made of gilded copper and cost about 100 million baht to build.

During a recent visit, the statue’s upper body was nearly completed. Temple staff believes work will finish by July.

The statue is called Buddha Dhammakaya Dhepmongkol, or the Great Buddha in short. Once completed, it will rise over the current tallest Buddha figure in Bangkok, the 32-meter statue of Wat Indraviharn.

But the achievement will still stop short of rivalling the tallest Buddha statue in Thailand, which sits at 92 meters in Ang Thong province.

Wat Paknam is considered the birthplace of the Dhammakaya, a school of Buddhism popular among wealthy urbanites and politicians. The sect, which believes in purity of the body’s soul, has drawn controversies in recent years for its alleged emphasis on earthly riches.

Its former head abbot, 75-year-old Dhammajayo, is currently on the run from the authorities on charges related to money laundering.