India’s largest reclining Buddha statue, some 30 meters in length, is to be installed on the premises of the Buddha International Welfare Mission (BIWM) temple in Bodh Gaya, Bihar, within the next few months. The statue was originally intended to be installed on Buddha Purnima, which this year fell on 26 May, according to BIWM founder Venerable Ariyapala Bhikkhu, but the unveiling ceremony was postponed due to COVID-19 restrictions.

The renowned sculptor Mintu Pal from Kolkata and his team of 22 artisans were commissioned to create the statue at the Nainan Bandhab Samiti ground in Baranaga’s Ghoshpara on the outskirts of Kolkata. The statue, which was fabricated entirely from fiberglass infused with a golden pigmemt, was made in several parts. Each section of the statue is now at BIMW, where it will finally be assembled. A concrete foundation and an iron-and-steel-based structure have been created at the venue where the statue will be permanently installed. 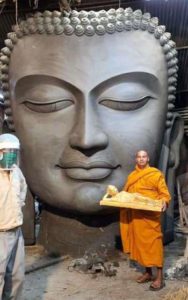 “It gives me pleasure to see Mintu Pal’s work,” Ven. Ariyapala told Buddhistdoor Global. “We have a 45-foot [14-meter] Buddha statue in Rajchandrapur on the outskirts of Kolkata, where our BIMW has another branch. I believe the reclining Buddha statue will impress everyone.”

According to media reports, Pal began creating the statue in March 2019, but work was suspended due to the COVID-19 lockdown. The artists resumed their work in November last year.

Ven. Ariyapala explained that just before attaining Mahaparinirvana in Kushinagar, Uttar Pradesh, the Buddha recited his last words while lying on a throne. As a result, Buddhists place high importance on statues of the reclining Buddha.

Ven. Ariyapala also noted that there is a 24-meter staue of a standing Buddha in Saranath, Uttar Pradesh, and a 24-meter Buddha statue in Bodh Gaya seated in a meditation posture.

“Our reclining Buddha statue is also 80-foot [24 meters],” Aryapal said, adding that the statue could have been made bigger, but as the Buddha lived 80 years so the length of the statue was decided in accordance. However, with the addition of an altar, the entire length of the scuplture comes to 100 feet [30 meters]. This will be the largest reclining statue in the country, he added.

The sculptor Pal is happy to be a part of history, observing that Buddhist monks, pilgrims, and tourists from all over the world visit Bodh Gaya: “It is good to think that everyone will see this golden statue. This fiberglass statue will probably remain for thousands of years even after we leave this Earth.”

The figure of the reclining Buddha was first depicted in Gandharan art between 50 BCE and 75 CE, peaking during the Kushan period between the first and fifth centuries CE. Reclining Buddha statues show the Buddha lying on his right side, with his head resting on a cushion or his right elbow. The imagery expresses the message that all living beings have the potential to become awakened and to be released from the cycle of death and rebirth.

“The reclining Buddha comes from this very well-recorded final moment of the Buddha’s life, which is why it could be recreated visually with such distinct details in statues and paintings,” said Dr. Vruttant Manwatkar, assistant professor at Mumbai’s KC College. “This also signifies the Buddha’s last deeksha—even while on his deathbed, he took a follower into the fold.” (The Indian Express)