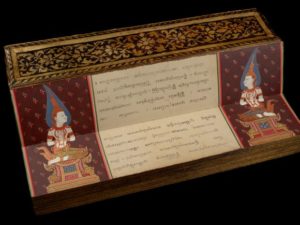 Aidan Dunne
The consummate collector, Alfred Chester Beatty relied on the advice of several experts, but even so, how he managed to keep up with the development of his collection given its scope and depth is a mystery. Even now it is still being researched, evaluated and documented. Regarding evaluation, Beatty’s reputation for acquiring only the best examples from any field that interested him has been borne out again and again.

The latest instance is his holding of 18th- and 19th-century Thai Buddhist manuscripts. The collection includes about 60 of them, all substantial, which places it on par with many major institutional collections internationally, and they are known to be of exceptional quality.

A good proportion of these manuscript books are now on view at the Chester Beatty Library, at Dublin Castle, carefully presented so that multiple leaves are unfolded and visible. The books are made from either palm leaves or, later, paper leaves in accordion folds. Beatty had about 20 palm-leaf manuscripts. Incised with texts – and inked by the application of soot paste – they are quite austere, beautiful objects.

The words are teachings in the Theravada tradition, the Way of the Elders, possibly the oldest written record of Buddhist teaching

While the subsequent use of mulberry or kohoi-bark paper allowed more scope, especially enabling the generous use of illustration. The relatively long, narrow format followed on from the palm leaves. Still, the more flexible proportions meant that a central panel of text could be fringed by decorative borders and flanked by elaborately worked images, usually elegantly drawn and decorated with surprisingly rich, saturated colours.

Not alone the Buddha, Muldowney explains. “There are two main strands of subject matter in the Thai books. In the Pali canon there are about 550 stories of the Buddha’s past lives, “jatakas” or birth tales of the Buddha, charting his moral evolution through countless lives. In Thai Buddhism, particular importance is attached to the last ten tales.” They represent the culmination of the cycle of rebirth that led to the Buddha’s enlightenment. “In the concluding ten stories he consolidates, one by one, the ten virtues that lead to a state of perfection. So the illustrations tend to concentrate on these stories of the acquisition of virtue, especially the final and most important virtue: generosity.”

That is not the end of the story, though: “The other main strand, we find, has to do with stories involving the legend of the monk Phra Malai.” Manuscripts in which he features usually include verse accounts of his experience in Thai, following on the Pali scripture. As legend has it, Phra Malai had accumulated a level of merit that allowed him exceptional privileges. He was, for example, able to visit hell and heaven, and he was on speaking terms with the Buddha. “In hell, when he visited, he was beset by troubled souls who implored him to encourage their relatives on earth to live virtuously and avoid their unhappy fate.” On the other hand, heaven, he could report, was terrific and well worth the effort of getting there.

There is an example, much more rare, that moves beyond the birth tales and the deeds of Phra Malai, and deals with the life of the Buddha, who abandoned his royal destiny and opted for a life of study, hardship and meditation. While stories of the life do feature in other forms, including wall paintings in Thailand, it is, she notes, unusual to find them in a manuscript.

The books are formidable artefacts, and, without question, a large part of their appeal lies in the quality of their images, which is generally very fine. It is interesting how it develops over time. The earliest examples – and, Muldowney points out, the climate was essentially against their long-term survival – are exceptionally beautiful and elegant.

Fairly quickly in the 19th century the impact of Western influence becomes apparent and the landscape settings, particularly, but also the figures, acquire a Westernised quality of naturalistic representation – not to mention changes in palette.

Historically, time was running out. Early in the 20th century, predictably, advances in print technology meant these labour-intensive, highly skilled artisanal products were quickly supplanted by relatively high-quality, low-cost alternatives. Nonetheless, preserved and displayed, they survive as a glimpse into a world that is much closer to our own than you might expect.

Thai Buddhist Tales: Stories along the Path to Enlightenment, curated by Laura Muldowney and supported by the Robert HN Ho Family Foundation, is at the Chester Beatty Library, at Dublin Castle, until January 26th, 2020