Archaeologists in Afghanistan have discovered exceptionally rare pieces of an ancient Buddhist manuscript dated to around the seventh century AD at an ancient settlement near Kabul.

In the spring of 1963, a French geologist set out from Kabul to survey a large outcrop of copper-bearing strata in the mountains above the village of Mes Aynak, approximately 40 kilometers southeast of Kabul in Logar province in eastern Afghanistan. There, he discovered a vast religious settlement occupied between the third and seventh centuries located at a key location on the famed Silk Road connecting Asia and the Middle East.

Now, if you ask people to name the world’s oldest printed book the most common reply is Gutenberg’s Bible , but Buddhist texts, the Diamond Sutra for example, that was printed in AD 868, was compiled about 550 years before Gutenberg was born. Regarding these newly discovered texts the Japanese daily The Mainichi reported that an Afghan archaeological institute stated, “The sutras written in Sanskrit on tree bark and were discovered on a hillside a few years ago in Mes Aynak ,” and it is suspected that the manuscripts might have been “housed in an archive.” 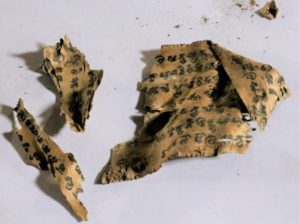