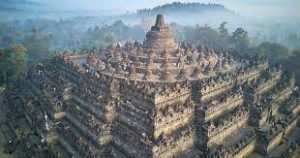 The Borobudur Temple Compounds is the world’s largest Buddhist monument, measuring roughly 63 acres. It is a Mahayana Buddhist temple located in Java, Indonesia, with many experts believing it was built during the rule of the Sailendra Dynasty (c. 650-1025 CE). UNESCO designated the Borobudur Temple Compounds as a World Heritage Site in 1991 due to its unique craftsmanship. The site remains the most visited tourist site in Indonesia and plays a significant role in Indonesian architecture and cultural identity.

The Borobudur Temple Compounds is located in Kedu Valley in central Java, approximately 26 miles northwest of Yogyakarta and over 50 miles west of Surakarta. The temple sits between two volcanoes — Mt. Sundoro-Sumbing and Mt. Merbabu-Merapi and two rivers — Progo and Elo. It is also situated close to two other Buddhist temples in the Kedu Plain: Pawon and Mendut. Borobudur sits on a bedrock that is located 869 feet above sea level.

The Borobudur Temple Compounds is one of the most significant Buddhist monuments in the world. The circumstances around the period in which the Javanese built Borobudur remain a mystery. No records exist regarding its construction or purpose. However, many believe it was built in the 8th and 9th centuries during the Sailendra Dynasty. Archaeological and scholarly experts agree that Borobudur’s construction ended around 800-825 CE, and many believe that King Samaratungga oversaw the temple’s construction.

There have been disagreements between modern historians about the political and cultural events that led to Borobudhur’s construction. Some historians suggest that the Sanjaya dynasty began constructing a Hindu temple in the area around 775 CE. However, they may have been driven from the site by the Sailendra dynasty and unable to finish the temple. Some Javanese historians believe the Sailendra and Sanjaya dynasties are the same family and that religious support changed due to personal beliefs.

The real cause for the abandonment of Borobudur is unclear, and the reasons for its abandonment remain unknown, but there are several theories. Some theorize that volcanic eruptions in the area caused the Mataram Kingdom to move its capital away from Borobudur in the 10th or 11th century, which may have decreased the temple’s religious significance. Furthermore, the arrival of Islam in the 9th and 10th centuries and the rapid conversion to the religion in the 15th century may have diminished Borobudur’s importance to the Javanese who converted to Islam. In addition, centuries of volcanic eruption and rainforest growth, among other natural events, may have caused the temple to become inaccessible.

For centuries, volcanic ash and overgrown vegetation covered the temple until the Englishman Thomas Stamford Raffles organized an expedition to rediscover it in 1814. After its rediscovery, the site became a hotspot for research and archaeological investigations.

There were several attempts to restore Borobudur. The first restoration took place from 1907 to 1911, and the second restoration was completed by 1983. In 1968, Indonesia and the United Nations worked to launch a campaign to restore Borobudur, and over the next 15 years, $20 million was raised to support the plan. After massive efforts to reclaim statues and return stones, Borobudur was cleaned, rebuilt, and reopened to the public.

The Borobudur Temple Compounds was built with roughly 2 million cubic feet of gray volcanic stone. It was also made without using any cement or mortar and constructed by interlocking blocks. There are approximately 1.6 million blocks of volcanic rock used to create the temple compound. It resembles a stepped pyramid with three levels — a square base, a middle level, and an upper level. There are five square terraces on the middle level and three circular terraces on the upper level.

The Borobudur’s design is in Gupta architecture and reflects India’s influence on the region while also incorporating indigenous Indonesian elements. The monument has the largest number of Buddhist sculptures of any single site in the world. There are statues of the Buddha on 72 openwork stupas, which surround the circular platforms. Stupas are commemorative mounds in Buddhism that typically have holy relics.

The Borobudur Temple Compounds resemble a lotus, which is the sacred flower of Buddha. A bodhisattva has to go through 10 stages before reaching Buddhahood. The 10 mounting terraces symbolize these stages. Borobudur was built to resemble a three-dimensional mandala, which is a diagram of the cosmos used for meditation, and a symbol of the universe.

Detailed relief sculptures convey a physical and spiritual journey to help guide people towards higher states of consciousness. These sculptures recount the Buddha’s teachings, his past lives, and stories from Buddhist scriptures. At the top of the temple lies a large central stupa, which symbolizes the enlightened mind.

Every level represents a stage towards enlightenment. To embark on this spiritual journey, an individual starts at the eastern stairways and walks clockwise around each of the monument’s nine levels before reaching the top, which in total equals a distance of three miles. Each level represents a higher plane of consciousness.
Kamadhatu (the realm of feeling)

The lowest level, which is partially hidden, is the structure’s base and contains hundreds of reliefs of earthly desires and the law of cause and effect. It showcases human behaviors such as robbing, torture, and killing. This level is the lowest realm of the Buddhist universe.
Rupadhatu (the realm of form)

The next level is five square terraces that contain a series of reliefs carved along four galleries that showcase the specific life events of the Buddha and scenes from his previous lives. On these levels, there are 328 Buddha statues and 1,212 decorative panels.
Arupadhatu (the realm of formlessness)

The upper level, which has three circular terraces leading to a central stupa, represents the detachment from the physical world and rising above the earth. It has very little decoration and is less ornate, signifying purity. There are 72 bell-shaped stupas lining the terraces, many of which contain a statue of the Buddha.
Threats
Borobudur tourists
The high traffic footfall is a threat to the World Heritage Site.

Today, Borobudur is a popular tourist destination and the site of Buddhist pilgrimage. However, environmental and security issues and the high volume of foot traffic due to tourism are threats to the site. The temple compound lacks any control of commercial activities and lacks an adequate tourism management strategy.

The plants that had covered Borobudur for years also protected it from extreme weather. The restoration cleared this vegetation and exposed Borobudur to Java’s harsh temperatures and weather conditions. As a result, Borobudur experienced more damage throughout most of the 19th century than the thousand years before. The building stone is deteriorating at a growing rate.

The Borobudur Temple Compounds is a UNESCO World Heritage Site of spiritual significance to the Buddhist religion and was designed as a three-dimensional path to enlightenment. Many experts believe it was built in the 8th and 9th centuries and abandoned for centuries before its rediscovery in 1814. It has experienced damage due to the elements, and the increase in tourism remains a significant threat to the monument.