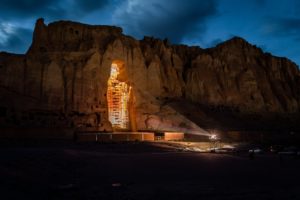 A 3D light projection last month in Bamiyan, Afghanistan, of how a destroyed Buddha, known as Solsol to locals, might have looked in its prime.CreditCreditJim Huylebroek for The New York Times

BAMIYAN, Afghanistan — Here is a reminder to someone with the initials A.B., who on March 8 climbed inside the cliff out of which Bamiyan’s two giant Buddhas were carved 1,500 years ago.

In a domed chamber — reached after a trek through a passageway that worms its way up the inside of the cliff face — A.B. inscribed initials and the date, as hundreds of others had in many scripts, then added a little heart.

It’s just one of the latest contributions to the destruction of the World Heritage Site of Bamiyan’s famous Buddhas.

The worst was the Taliban’s effort in March 2001, when the group blasted away at the two giant statues, one 181 feet and the other 125 feet tall, which at the time were thought to be the two biggest standing Buddhas on the planet.

It took the Taliban weeks, using artillery and explosive charges, to reduce the Buddhas to thousands of fragments piled in heaps at the foot of the cliffs, outraging the world.

Since then, the degradation has continued, as Afghanistan and the international community have spent 18 years debating what to do to protect or restore the site, with still no final decision and often only one guard on duty.

One recent idea came from a wealthy Chinese couple, Janson Hu and Liyan Yu. They financed the creation of a Statue of Liberty-size 3D light projection of an artist’s view of what the larger Buddha, known as Solsol to locals, might have looked like in his prime.

The image was beamed into the niche one night in 2015; later the couple donated their $120,000 projector to the culture ministry.

The local authorities bring it out on special occasions, but rarely, as Bamiyan has no city power supply, other than fields of low-capacity solar panels. The 3D-image projector is power-hungry and needs its own diesel generator.

Most of the time, the remains of the monument are so poorly guarded that anyone can buy a ticket ($4 for foreigners, 60 cents for Afghans), walk in and do pretty much whatever he wants. And many do.

Souvenir-hunters pluck pieces of painted stucco decorations from the network of chambers or take away chunks of fallen sandstone. Graffiti signatures, slogans, even solicitations for sex abound.

Anyone can, as A.B. did, crawl through the passageways surrounding the towering niches in the cliff, through winding staircases tunneled into the sandstone and up steps with risers double the height of modern ones, as if built for giants.

At the end of this journey, you arrive above the eastern niche, which housed the smaller Buddha, and stand on a ledge just behind where the statue’s head once was, taking in the splendid Buddha’s eye view of snow-capped mountains and the lush green valley far below.

The soft sandstone of the staircases crumbles underfoot, so that the very act of climbing them is at least in part a guilty pleasure — though no longer very dangerous. Twisted iron banisters set in the stone make the steep inclines and windows over the precipices more safely navigable, if not as authentically first millennium.

When the Taliban demolished the Buddhas, in an important sense they botched the job.

The Buddhas, built over perhaps a century from 550 A.D. or so, were just the most prominent parts of a complex of hundreds of caves, monasteries and shrines, many of them colorfully decorated by the thousands of monks who meditated and prayed in them. 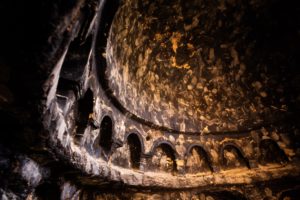 In the 1990s, the caves around the Buddha complex in Bamiyan were home to mujahedeen factions that burned wood for heating. As hard-line Islamists, they were against Buddhism, slapping their shoes on the cave walls out of disrespect.CreditJim Huylebroek for The New York Times

Even without the Buddhas themselves, their niches remain, impressive in their own right; the Statue of Liberty would fit comfortably in the western one.

Unesco has declared the whole valley, including the more than half-mile-long cliff and its monasteries, a World Heritage Site.

“If the Taliban come back again to destroy it, this time they would have to do the whole cliff,” Aslam Alawi, the local head of the Afghan culture ministry, said.

Unesco has also declared the Bamiyan Buddhas complex a “World Heritage Site in Danger,” one of 54 worldwide. The larger western niche is still at risk of collapsing.

Most archaeologists oppose restoration, arguing that the damage was too great and that the cost would be prohibitive. Estimates range from $30 million for one Buddha to $1.2 billion for the whole complex. 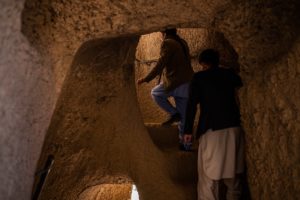 Tourists from Ghazni Province making their way through winding staircases carved from crumbly sandstone at the Buddha complex.CreditJim Huylebroek for The New York Times

Others argue that the destruction itself has become a historical monument, and that the ruins should be preserved as is, a visible reminder of Taliban iconoclasm.

A scientific conference in Tokyo in 2017 — involving Afghans, Unesco, scientists and donors — met to study the matter, and to discuss Afghanistan’s formal request for money to rebuild the eastern Buddha. A diplomatically worded final statement called for more study and an indefinite pause in restoration work.

Or, as the Unesco field officer Ghulam Reza Mohammadi in Bamiyan put it, “The Buddhas will never be rebuilt.”

The important thing is stabilization and conservation of the remains as they are, Mr. Mohammadi said.

“The government can’t even afford to pay for five guards they promised,” he said.

No work has been done on the eastern niche since 2013, when a German archaeology team began rebuilding the feet of the smaller Buddha, using new materials and raising an international archaeological hue and cry that brought the work to an abrupt end.
Sign up for The Interpreter

Subscribe for original insights, commentary and discussions on the major news stories of the week, from columnists Max Fisher and Amanda Taub. 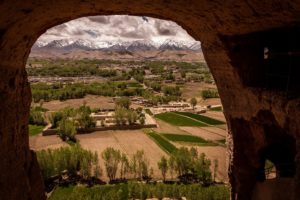 A view of snow-capped mountains and the lush green valley below where a Buddha statue stood.CreditJim Huylebroek for The New York Times

Officials say money has run out to work on the western niche, where scaffolding has filled the vast space for at least five years.

Mr. Alawi, while in charge for his ministry, does not even have a key to the door blocking a passageway to the top of the western niche; he said a German archaeologist took it with him.

Elsewhere on the site, pieces of the Buddhas are in locked cabinets, along with artifacts recovered from the caves, but the Afghans do not have the keys to the locks. A French archaeologist took those, then retired, and has not responded to official requests to return them, Mr. Alawi said.

“Somebody buys your dinner, they get to tell you what to eat,” Mr. Alawi said, quoting a Persian saying.

Another problem is that no one is really sure a restored Buddha would be safe, given Afghanistan’s continuing war and its government’s declining fortunes.

Bamiyan’s governor, M. Tahir Zohair, favors rebuilding the smaller Buddha. But he admitted, “The international community is worried the Taliban might come back and destroy it again.”

So that leaves the hologram.

After sunset on a recent Monday, Mr. Alawi set up the projector for a demonstration and for 15 minutes filled the deep darkness of the western niche with the huge image of Solsol, left palm forward, visible from across the valley.

Arif Taquin, 28, an artist in town, rushed over to the site. “The first time I saw this I cried,” he said. “Every time I see it again I am so moved in new ways, and it is only 3-D. To think we had the real thing, and now it is gone.”

When the generator died and the light flickered off, what was left to see in the niche was, as Mr. Taquin put it, “all that ugly scaffolding.”