Something about the statue made it unforgettable to Ellery Sedgwick, A.B. 1894, when he first encountered it on a trip to Japan in 1930—so unforgettable that when he returned to the country six years later, he looked for it in four different cities. When a Japanese art dealer asked if he would recognize the figure if he saw it again, he replied, “After eight years, would a lover know his mistress?” The dealer found it for him three days later: a life-sized wooden statue of a small boy dressed in red, his hands pressed together as if in prayer or meditation. Sedgwick—owner-editor of the Atlantic Monthly—purchased the piece and had it shipped to the Museum of Fine Arts in Boston. In 1937, a visiting Japanese conservator at the MFA discovered more than 70 objects—including smaller sculptures and religious texts—that had been sealed inside the sculpture’s body cavity, apparently untouched since the its creation in 1292.

Something, too, has kept scholars and researchers separated by decades and continents at work for almost a century, trying to understand the most minute details of the sculpture and the objects it once contained. Prince Shōtoku : The Secrets Within, an exhibit at the Harvard Art Museums open through August 11, displays the results of that scholarship, alongside the statue and all of its objects, reunited for the first time since 1937.

Rachel Saunders, Rockefeller associate curator of Asian art at the Harvard Art Museums, thinks that the statue’s “dual identity” might explain the enduring fascination—it is intimately human and distantly divine at the same time. It depicts the prince Shōtoku Taishi, considered the founder of Buddhism in Japan. The prince is captured at the moment when, according to legend, as a two-year-old (a year old, by Western count) he took several steps forward, put his hands together, praised the Buddha, and manifested a relic—the eyeball of the Buddha—between his hands. The statue of Shōtoku is anatomically realistic, standing just below the average height of a one-year-old today, with baby fat around his belly, wrists, and neck. But his knit brows and solemn expression emanate the charismatic power and authority of a religious icon. His eyes, made of rock crystal and purposely designed to catch the light—Saunders shines her cell-phone flashlight into them to demonstrate—are downcast and look beyond the viewer. “You get the sense that there’s an interiority, like you would with another person, something inside him that you can’t see—but he’s also looking beyond where we can see,” Saunders says.

“This dual identity, I think, is one of the sources of his ability to draw people to him,” she continues. “And that was what he was designed to do. He was intended to be at the center of a community who worshipped him and put their hope in him. And Ellery Sedgwick felt that when he first saw the sculpture. He didn’t know who he was, he didn’t know anything about him, but he felt this connection.”

The statue sits in a display case in the center of the exhibit. “He’s in a vitrine right now, so there’s a layer between you and him,” Saunders concedes, “but you can still sense it—he’s got this incredible lifelike presence.” It is the first thing that wandering visitors see upon entering the room—perhaps the perfect setup for a chance encounter like the one that so mesmerized Sedgwick in 1930 Tokyo. Along the walls and in glass cases are the objects the statue once contained. Like the “dual identity” of the statue itself, the stories these objects tell are both grand and minute, societal and individual.

The donation of objects to a statue is a ritual practice that stores up karmic merit for donors, which means the artifacts inside Shōtoku were among people’s most precious possessions, items they decided to give up as a sign of devotion. Many of the inscribed documents even have names written on them—donors “didn’t want any mix-up,” Saunders says. Someone, for example, decided to give a copy of chapter 25 of the Lotus Sutra, one of the most influential Buddhist texts in East Asia, which now sits in a display beside two other Buddhist texts. The Lotus Sutra chapter is “perfectly written out, no mistakes, no changes to the text.” Yet even this faithful reproduction of a canonical text reveals personal traces of whoever owned it: the bottom of the first page is worn away, perhaps the result of someone rubbing a thumb along the text while chanting.

The statue and its objects also tell scholars about the cults and religious practices that existed in Japan at the time of its making. The pieces were most likely commissioned and organized by aristocratic nuns associated with Eison, a monk who led a revival movement of Japanese Buddhism during the late thirteenth century. At the time, it was less socially acceptable for women to join a nunnery than for men to join a monastery, but Eison “believed very strongly that, for the Buddhist community to be complete, you needed women; you needed nuns,” Saunders says, explaining the importance of women in the creation of the collection. Eison’s movement was closely associated with the Esoteric Wisdom King Aizen Myōō—a six-armed deity depicted with red skin, flaming hair, and sharp fangs—of whom two sculptures were found inside Shōtoku, both now on display.

Another clue about contemporary events unsettling an exclusive version of Buddhism can be found in tiny slips of paper, inscribed with religious writings, that hang framed on a wall of the exhibit. They were distributed by an itinerant monk named Ippen, and they guaranteed recipients entrance to the Buddha’s Western Paradise when they died. Buddhism before this time “tended to be very scholastic; you needed a lot of money; you needed to study; you needed to have the leisure to really be an adherent,” Saunders explains. Monks like Ippen “decided they weren’t going to have any of that, they basically democratized it, made it very simple—even as simple as saying one particular praise to the Buddha, or receiving this piece of paper. It was a very disruptive time.”

On display in the next room is a complete twelfth-century Chinese woodblock-copy of the Lotus Sutra that was found inside the statue. The piece has been housed at the Library of Congress since the 1940s, when Sedgwick gave it to the library in return for its analysis. It is the only object that has been separated from the statue since 1937. (The statue and its contents were privately owned by the Sedgwick family until Walter Sedgwick ’69—Ellery’s grandson—donated the collection to the Harvard Art Museums earlier this year.) The Library of Congress loaned the Lotus Sutra woodblock to Harvard for the exhibit—a big deal, Saunders explains, because only three such sutras are known to exist. So Shōtoku is reunited with all of his objects for the first time in more than 70 years.

Despite the charm of this temporary reunion, and the presentation of all the research done to date, the exhibit is not intended to be a finish line: scholarship on the statue will continue. “What we found during the investigation was that…we did get some answers—but in fact what we really got was more questions,” Saunders says. How were the objects originally arranged inside the statue? Was the 1937 MFA opening really the first time the statue had been unsealed since 1292, or might it have been opened before? What does that mean for the conclusions that researchers can draw? “It’s taken a long time and a lot of people to get even to here, and we’ve still got a ways to go.” But there is forward momentum, spurred by a confluence of events that sparked a burst of scholarship in recent years.

On a wall of the exhibit is a large interactive touch screen that allows museum-goers to learn more about the objects on display. One of the options is a chanting of the Lotus Sutra, accompanied by a description and relevant images from the Library of Congress copy of the scripture. Saunders starts the recording of the chanting—a woman’s voice, steady, stately, almost otherworldly, yet warmly human—and we listen for a moment in silence.

“I had been thinking, ‘We need a monk to chant it’—and then I thought, ‘No, we don’t need a monk; we need a nun,’” she says and laughs. “And then I thought, ‘Where are we going to find a nun?’” She did find one: the abbess-in-waiting at a temple in Japan, whom she had heard chant earlier this year at the Metropolitan Museum of Art in New York, during the opening for an exhibit on The Tale of Genji. “I heard her and it was just so stunning. And she just recorded this on an iPhone for us.”

Saunders pauses, then continues. “One of the most incredible things about working on this project is that there’s been a lot of serendipity—just surprising coincidences, things working out, chance discoveries, this kind of thing,” she says, referencing the recording. “You know, you work with him”—she gestures to the statue—“for a while and you start to think: there is a power there. There have just been too many serendipitous occurrences for me to feel like it’s chance anymore.”

Click on arrow at right to see full statue and additional images
Prince Shōtoku at Age Two, a thirteenth-century Japanese icon made of wood with inlaid quartz eyes 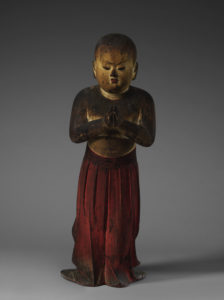