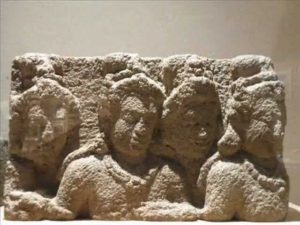 Standing inside the ancient ruins of the approximately 1,500-year-old Bukit Batu Pahat temple, built amidst delightful, lush greenery and the soothing sounds of the Merbok Kechil River running right next to it, I yearned to be transported to a time when the Bujang Valley civilisation in Kedah was at its zenith, some 2,500 years ago.

Gently resting my fingers on the robust stone blocks lining the temple walls, I closed my eyes and tried to visualise its past splendor.

Tired, travel-weary traders from both the East and the West would have docked in Pengkalan Bujang, before making their way into the thronging city. If they were travelling at night, the brightly burning beacons atop large stone hearths on the mighty Mount Jerai would have safely guided them into the jetty. Once they berthed and furled up their sails, sweaty stevedores would have helped them unload their precious cargo and safely transport them to the city.

Once in the city, they would have bartered for a whole host of things including metals, textiles, rainforest produce and ornaments with traders from all over Asia. Its diverse ethnic and linguistic composition would likely have resembled that of a modern metropolitan city.

After a busy few days of conducting business and enjoying the excellent facilities that Bujang Valley offered, they would have replenished their supplies in preparation for the return journey. But before they did, they would have made their way up to the many temples there, including the Bukit Batu Pahat Temple, to gain blessings for their long, onerous trip back home.

Oh what I would not give to have experienced life back then.

Having known about the significance of Bujang Valley for a long time, and having visited it recently, I mourned the lack of attention given to it by our history books, local media and popular culture.

They have imprinted on us that Malacca is the most historic city in Malaysia. The great civilisations that predated it, including Bujang Valley, have been relegated to the sidelines – a fact I’ve always found to be bizarre.

I’ve always thought that there has to be a lot more to the story than they would have us believe. After all, Malacca, as impressive as it must have been in its heyday, is still a relatively young city – only being settled from around 600 years ago (post-1,400 AD).

But we live on the fractured remains of the prehistoric landmass of Sundaland – home to at least tens of thousands of years of continuous human habitation. So surely we must have had sophisticated, ancient cities that predated Malacca and rivalled the antiquity of the Roman Empire, and the Chola and Han dynasties?

And sure enough, our very own Lembah Bujang did.

Mirroring the Hindu-Buddhist philosophy which its inhabitants are believed to have been steeped in, it had many names – the Indians called it Kadaram, the Chinese called it Chieh-Cha and the Arabs called it Kalah.

Strategically sandwiched between the snaking, life-sustaining Muda River and the coast-hugging, majestic Mount Jerai, Bujang Valley was a thriving, bustling port city from at least 535 BCE – more than a staggering 2,500 years ago.

The reason for its rise to prominence is immediately apparent. Thanks to Bujang Valley’s felicitous location, sailors and traders from India, China, and the Arab world would have been hard pressed to find a better place to seek respite in after an arduous journey by sea. The massive Mount Jerai would have been an unmissable landmark and the Merbok estuary would have provided sheltered anchorage and easy passage deep into Kedah via its extensive riverine network.

The prevailing theory about Bujang Valley’s origins is that it started as a trading settlement before evolving into the first port in Southeast Asia and one of the busiest of its time. It was heavily influenced by Tamil kingdoms of old and is thought to initially have been an outpost of the regionally dominant Langkasuka empire before it was absorbed by the rapidly rising Srivijaya empire.

The fact that the landscape is bestrewn with smaller shrines as opposed to large ones similar to those found in Angkor Wat in Cambodia and Borobudur in Indonesia lend credence to the claim that it was more a bustling, commercially indispensable entrepot than a political powerhouse.

However, not everyone agrees with this assessment. V Nadarajan, a local historian, says that Bujang Valley was the “foremost and most prominent maritime kingdom of Southeast Asia in ancient times; like Melaka later and Singapore even later”. As evidence of this, he cites the fact that Rajendra Chola, the king of the powerful Tamil empire at the time was given the title “Kadaram-kondan”, which means the conqueror of Kadaram. For such a title to be bestowed upon him, it must have been a highly significant victory over a worthy adversary.

The unearthing of metal smelting facilities, and evidence of it being an administrative centre, by University Sains Malaysia’s archaeological team at nearby Sungai Batu recently strengthens this argument even further.

I’m sure there are more treasures buried from around Gunung Jerai right up to Cherok To’ Kun in Seberang Perai. Why, I wonder, isn’t more being done to unearth these treasures or to aggressively promote the Bujang Valley as Southeast Asia’s oldest civilisation?

Bujang Valley’s reign as the preeminent port city in the region lasted an astonishing 1,500 to 2000 years, up till the storied rise of Malacca in the 15th century, which went on to supplant it.

However, having visited both Angkor Wat and Borobudur, I was slightly underwhelmed by the unostentatious, modest-looking temples that dot Bujang Valley. But I quickly shrugged the feeling off, attributing this to the fact that its earliest inhabitants were centuries older than those of Angkor Wat and Borobudur and hence probably did not yet possess the technology to create the intricate relief sculptures that adorn the ancient Cambodian and Indonesian architectural marvels.

But the moment I entered the Lembah Bujang Archeological Museum, I realised how wrong I was.

Inside, my eyes caught sight of an arresting, exquisitely carved stone sculpture of the Hindu mythological figure Kaala, which was perched at the tail end of a broken stairway. A bestial, menacing presence, Kaala is the personification of time. It is meant to remind us of how time will claim us all eventually; and that it’s important that we make the best of it while we can.

This spectacular sculpture easily rivalled the architectural complexity and beauty of those found in Angkor Wat and Borobudur.

This indicates there must invariably have been entire walls or pillars that were furnished with such pulchritudinous sculptures. Unfortunately all we are left with today are the broken bits and pieces of these once-majestic, but now badly desecrated structures.

Alas, as the day came to a close, forcing me to begrudgingly leave the site, I couldn’t help but imagine how it would be if the ancient structures in Bujang Valley still stood tall, the way Angkor Wat and Borobudur still do. Imagine what an absolutely spectacular sight it would be. Imagine how much more we would now know about our rich, illustrious past.