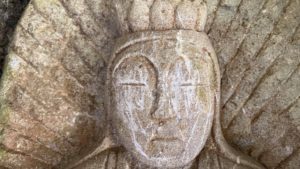 TAIPEI (Taiwan News) — The tourism authorities are hunting down vandals who intentionally damaged a century-old Buddha statue on an old trail in Taroko National Park (太魯閣國家公園) in eastern Taiwan.

A tourist guide reported Monday (Aug. 24) that a Guanyin statue on the Zhuilu Old Road (錐麓古道), a cliff trail in the scenic park in Hualien County, had been vandalized, with multiple scratches appearing on its face.

Upset by the defacement of the historic stone statue, the guide surnamed Yang urged the authorities to beef up protection of the relic by adding acrylic fences or relocating it to the visitor center downhill for better preservation, wrote CNA.

Finding the offenders may be challenging, as the surrounding area in the forest is without CCTV cameras. The Taroko National Park administration will reinforce patrols while working to restore the Buddha.

The 60-centimeter-tall statue was built between 1914-15, when the Zhuilu Old Road underwent repair. The 10.3-kilometer trail, which is partly closed, requires visitors to apply at least one day ahead.

Tourists are warned against the willful destruction of any public property in Taiwan’s national parks, which can result in fines of NT$3,000 (US$102) in compliance with the National Park Law, per Liberty Times.