Of course, this is NOT a Buddha.

After lighting up Patricia’s Green since May 2018, Charles Gageken’s 50-foot LED light sculpture SQUARED, an arboreal-inspired work noted for its 786 white cubes that change colors, will fell in favor of another piece, Tara Mechani, by local artist Dana Albany.

The sculpture, a futuristic female robot inspired by Maria from the silent film Metropolis and the Buddha Tara, most recently made pitstops at Burning Man and Plaza de César Chavez Park in San Jose.

The sculpture is constructed with up of 80 percent recycled materials, which include machine parts and hardware reused from local businesses.

According to a press release from San Francisco Arts Commission, “Inside the figure is a custom-built chandelier made out of a repurposed brass light fixture with arms that have been bent and reworked to extend around the sculpture’s sides to form a ribcage.”

Come nightfall, the sculpture will emanate “a soft warm candelabra glow” that’s meant to represent her heart and soul.

“Playing with the contemporary fascination with technology, the artwork infuses the mechanical with the compassion and empathy associated with the ancient deity,” says Albany. “Tara Mechani challenges us to embrace the future without losing sight of past beauty and ancient wisdom.”

Albany has created and exhibited works for the de Young Museum of Art, the Exploratorium, the California Academy of Sciences, and the San Francisco Airport.

The neighborhood’s upcoming statue—made possible by the San Francisco Arts Commission, the Recreation and Park Department, and mandated fees from developers—will be on display at Hayes and Octavia from June 4, 2019 to June 2020. 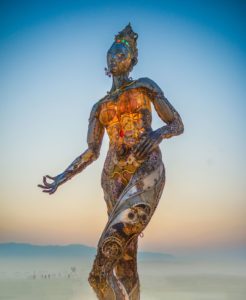