According to Buddhist lore, the temple was blessed during the final visit of the Lord Buddha to Sri Lanka, which is believed to have been in 500 BC. This monument, therefore, dates back even further. It was possibly built during the age of Anuradhapura Kingdom whose state religion was Theravada Buddhism.

According to early records, the temple enshrined a gem-studded throne upon which the Buddha preached. During the subsequent centuries the temple flourished and became a major pilgrimage center for the Sinhalese majority.

In the 16 th century, Sri Lanka was consumed by civil war which provided an opportunity for the Portuguese to intervene. They confiscated much of the temple’s land and it fell into near ruin. Sources claim that they attacked the temple as part of their efforts to Christianize the island.

Later the Dutch came to control the area and by then the temple was almost dilapidated. In the 18 th century, King Kirthi Sri Rajasinghe, the ruler of the kingdom of Kandy, attacked and destroyed many of the Dutch forts . He was a committed Buddhist and a great patron of monasteries and temples. He had Kelaniya Raja Maha Vihara rebuilt in the 1750s.

The king’s long reign saw a revival in Buddhism in Sri Lanka. At this time the temple became associated with the political history of Sri Lanka and its rise and fall became synonymous with the fortunes of the nation. When Sri Lanka (formerly known as Ceylon) became part of the British Empire, the temple experienced another period of decline as it no longer had a royal patron, but in the first half of the 20 th century the temple was once again restored with the help of Helena Wijewardena, a member of a wealthy family who were active in the independence movement.

The temple was designated an Archaeological Protected Monument in 2008 and is the center of the important Buddhist celebration Duruthu Maha Perahera. Millions of locals and tourists visit the temple site every year.
The Wonders of Kelaniya Raja Maha Vihara

The temple and other buildings cover an area of 10 acres, surrounded by a number of parks and gardens. The temple is built on a grand scale in a typical South Indian style, and also incorporates motifs from local Sinhalese culture.

The temple has four main sections. The first is the Golden Buddha Image House, named after paintings from the life of the Buddha, including scenes from his reputed visit to Sri Lanka. They were painted by a local artist named Solias Mendis and are noted for their vivid colors. The second section is New Temple House, a restored building based on the former temple. The third is the King’s Image House and lastly, The Reclined Buddha Image House is named after a famous painting of the Enlightened One.

The main attraction is undoubtedly the striking 90 feet (27 m) high stupa, which dominates the site. This is a traditional Buddhist funerary monument and consists of a hemispherical base and a spire-like structure. It is painted a dazzling white. A pradakhshina, or path which circles the stupa, enables pilgrims to walk around it, which is an important Buddhist devotional practice. 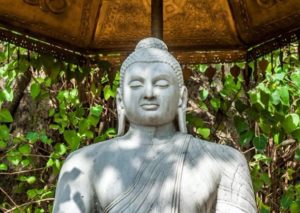 A statue of Buddha at the Buddhist Kelaniya temple in Sri Lanka. (nilanewsom/ Adobe Stock)

Among the important monuments is a shrine dedicated to King Vibhishana who is mentioned in the Ramayana, the epic poem. A Bodhi tree (sacred fig tree), which is associated with the Buddha, a bell tower, a number of other shrines, and prayer halls adorn the site.
Visiting Kelaniya Raja Maha Vihara

The temple is some 6 miles (9.6 km) from Colombo and there is plenty of public transport to the complex. Guided tours of the site are offered, although the temple is often crowded by devotees and best to avoid during major festivals. However, if you would like to immerse yourself in the culture of this fascinating country, it is possible to take part in some of the devotions.