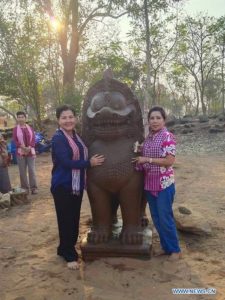 Prak Sovannara, the director-general of the culture ministry’s heritage department, said the larger-than-life lion statue was found by accident on Monday by a group of the ministry’s archeologists while digging the pond’s jetty.

“The guardian lion statue was made of sandstone and dates back to the late 12th or early 13th century,” he told Xinhua. “It was buried more than a meter under the ground and is still in good shape.”

Located in Banteay Meanchey province’s Thmar Puok district, the Banteay Chhmar temple was built in the late 12th or early 13th century during the reign of King Jayavarman VII.

Its outer gallery is carved with bas-reliefs depicting scenes of military engagements and daily life.

The temple is one of the several ancient sites that Cambodia has planned to nominate for the world heritage status at the United Nations Educational, Scientific and Cultural Organization (UNESCO).