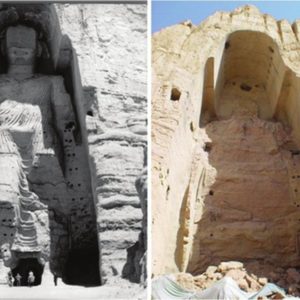 A Taliban member said the Bamiyan Buddhas were destroyed in 2001 because of religious ideology.

Approximately 780 historical monuments can be found in Herat Province

Kabul: The Taliban have pledged to preserve empty niches of Bamiyan Valley’s two giant Buddha statues amid concerns over the safety of ancient objects, artefacts, and museums in Afghanistan.

Culture and art professionals have not forgotten that heritage was systematically destroyed during the Taliban’s previous rule. An example is the destruction of the Bamiyan Buddhas in 2001 in Afghanistan.

Known as Salsal and Shamama locally, two monumental statues of Buddha were carved into the sandstone cliffs of Afghanistan’s Bamiyan province during the sixth century. The Taliban forces destroyed the Buddha statues in March 2001. Salsal (the symbol of a male) and Shamama (the symbol of a female) have heights of 53 meters and 35 meters, respectively.

In a statement to local media, the Taliban said the earlier move had a specific purpose. They, however, added that currently the niches of Buddhas are being protected, which is beneficial for promoting tourism.

“As an Islamic Emirate’s official in Bamiyan, I am trying my best to preserve these priceless and historical monuments of our province,” Ariana News cited Bamiyan’s Information and Culture Directorate head Mawlawi Saif-ul-Rahman Mohammadi as saying.

According to another member of the Taliban, the Buddhas were destroyed by the Taliban in 2001 because of their religious ideology.

“The Islamic Emirate did not make a hasty decision at that time [2001]. It was reviewed and researched based on Islamic laws and then they destroyed them,” Ariana News quoted him as saying.

Taliban officials had in the past said that more than 40 per cent of Afghan historical sites in Herat need immediate restoration to prevent further damage.

“Forty per cent of our historical monuments are in urgent need of restoration and preservation. But, so far, unfortunately, the country’s economy is not stable,” Director for Herat’s Information and Culture Department, Zalmay Safa, said.

Safa further stressed that the concerns would be taken into consideration once the governance issues were resolved.

Approximately 780 historical monuments can be found in Herat Province, including the Citadel, the Musalla complex, the Mausoleum of Gawhar Shad, and the Great Mosque.