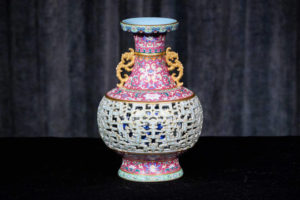 A vase has sold for £7million at auction after an elderly woman inherited it.

One woman’s rare Chinese vase sold for a whopping £7million at a recent auction.

For the last 50 years, the valuable object had been collecting dust in the elderly woman’s remote country house after she inherited it.

Here he found the extremely valuable Harry Garner Reticulated Vase hiding in a corner of her house.

In a video posted on the auction house’s YouTube channel, van Rosenthal revealed the moment he spotted the artwork.

He said: “We reached a room with a number of Chinese works of art inherited many years ago. Her four cats walked around freely among these. She pointed out a … partly gilded Chinese vase on a cupboard — a cherished object which she knew to be something special and valuable.”

While Van Rosenthal admitted he’s not an expert in Chinese works of art, he noticed that it was ‘no ordinary Chinese vase’ and sent photos to Nicholas Chow who is the chairman of Sotheby’s Asia.

When Mr Chow then visited the woman’s home, he confirmed that the vase could be worth millions.

According to the auction house, records for the vase suggest it was made specifically for the Qianlong Emperor and was once displayed in the Palace of Celestial Purity in Beijing’s Forbidden City.

The vase later belonged to Sir Harry M. Garner and Henry M. Knight, who were two major collectors of Chinese art and remained in the family for more than sixty years.

Sotheby’s describes the vase as “a lost masterpiece of Chinese porcelain” which reflects “the culmination of centuries of ingenuity in Chinese crafts.”

The pattern on the porcelain features archaic bronzes and a Rococo flower design, as well as interlaced dragons, mixed with bird and bat-like motifs.