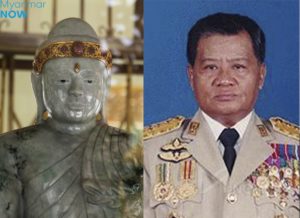 A seated Buddha statue that former dictator Than Shwe had carved in his image will be changed or removed as part of a government crackdown on depictions of the holy figure deemed inappropriate.

The statue, whose wide, stern facial features resemble the retired general’s, was erected in 1999 at Shwedagon pagoda, and is on a list of unorthodox statues drawn up by the religious affairs ministry.

“We will redo Buddha statues that go against the scriptures, and will remove them if they can’t be fixed,” the ministry’s deputy permanent secretary, Zarni Win, told Myanmar Now.

Former UN secretary-general Ban Ki-moon and Chinese President Xi Jinping are among those who have paid respects at the statue during visits to Yangon.

It is sculpted out of white jade stone mined from Lone Khin township in Hpakant, weighs 324kg and is adorned with 91 rubies, nine diamonds and 2.5kg of gold, according to its descriptive plaque.

Shwedagon pagoda’s board of trustees said they were not aware of the decision about the statue.

“We have not received any letter from the ministry of religious affairs,” board member Aye Tun told Myanmar Now.

Zarni Win said the issue would need to be handled delicately and that he could not disclose all the details. “Since the ministry cannot act in haste, we would like to request the public to be patient and understanding,” he said.

Earlier this week dozens of Buddha statues donated by senior military figures were removed from a monastery in Naypyitaw and their bizarre behind-the-back hand gestures raised eyebrows.

The figures were apparently a superstitious bid to keep the military in power. Than Shwe often performed superstitious rituals to maintain his power and followed the advice of astrologers and shamans, according to the local writer Tin Nyunt.