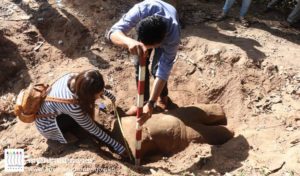 An incomplete piece of a statue measuring over one metre, thought to be an ancient remain, was found in the northeastern corner of Preah Ko temple in Siem Reap province’s Ov Lork village on Monday.

Ly Vanna, director of the Department of Conservation of Monuments and Preventative Archaeology with the Apsara Authority, said the statue was incomplete, noting that only the body was found, while the head, both hands and feet were missing.

“The statue is made of sandstone, and there are carvings that depict a short skirt with fishtail patterns that sits above the knee, along with a belt,” he said. “The kind of clothing is similar to that of Vishnu of Preah Ko style, as a Vishnu statue is currently displayed in the National Museum in Phnom Penh.”

“However, unfortunately the statue does not have a head or hands, which make it difficult to determine. If the statue had four hands, it can be confirmed as that of Vishnu,” he added. “But if it only has two hands, it could be Shiva. However, if we only rely on the outline of the statue, we can conclude that it is Vishnu from Brahmanism.”

He said that Apsara Authority would take the statue to clean and study for documentation before sending it for keeping in Preah Norodom Sihanouk-Angkor Museum in the future.

Thai Mech, a resident who found the statue, was quoted by the Apsara Authority as saying that he often crossed Preah Ko temple moat, but he did not notice the statue before. However, when he passed the area on Monday, he dug the ground and found the statue, which measures 1.14 metres.

“At first, I did not think it was a statue, but looking at the shape of the stone I continued to dig and found the statue,” he said. “Afterwards, I reported it to the Heritage Protection Police for safety.”

First Lieutenant Oun Yong, a heritage police in Angkor Archaeological Park’s Roluos, said people have discovered statues in the past and always reported it to the police for safe keeping and research.

“I would like to appeal to everyone who has found any statues or archaeological remains anywhere to please hand it over or report it to authorities for inspection,” he said.