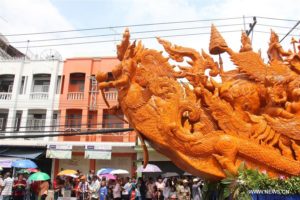 The 70-year-old devout buddhist, together with 7-year-old girl who was enjoying a two-day public holiday from Tuesday, have been carving some intricate patterns on wax for several hours in the outdoor complex of the temple in the scorching Ubon Ratchathani, a northeastern province famed for its most elaborated and largest candle festival of the country.

“Working on the carving is a pleasure. We contribute these pieces to the giant wax sculpture of the temple. Everyone is welcome to join the work. This is the way we make merits in the Khao Phansa Day,” said Nongyao who invited Xinhua journalist to make the carving.

Khao Phansa marks the start of the three-month rains retreat period which is referred to as “Buddhist Lent.”

This tradition stems from a time long before electricity had been invented. During the period monks were not permitted to travel away from their own temple and relied on candlelight more than ever to study and carry on their daily routines during the darker days of the rainy season. Originally, the donation of candles to temples was a simple and practical way to make merit.

In some provinces in Thailand, this tradition nowadays evolved into friendly competition with local communities aiming to outdo each other by creating bigger and more elaborate candles to donate. In Ubon Ratchathani, wax sculptures are created to mark the arrival of Khao Phansa.

The light yellow carving pieces growing under the grandma and granddaughter’s fingers were passed to a young craftsman sitting on ladder polishing a five-meter tall wax sculpture.

The man, head of the 15-strong team, was sticking the yellow pieces on the surface of the 3-meter tall sculpture portraying an excerpt from the story of Buddha when Queen Maya of Sakya or mother of Buddha had a vision in her dream.

“It took about 60 painstaking days to make the sculpture. It’s the last process of the piece before it’s to be displayed on parade during the Candle Festival. It’s of great charm and a sacred job, ” said the man who works on temple architectures.

Skillful artisans working on wax carving are few in the country as wax sculpture is not a major in any institute. Craftsmen in Ubon Ratchthani, a province in Thailand’s poorest northeast, are usually paid less than in big cities like Bangkok.

Fifty-three ornately carved wax deities, angels, and animals depicting Hindu and Buddhist tales were paraded through town on floats on Wednesday. Each represented a local temple, district or institution and were accompanied by dancers and musicians in traditional costume.

At the end of the parade, a winner is selected and showcased for the rest of the year at its temple. The following year, the wax is recycled and used for new wax sculptures.

The Candle Festival culminated in celebrations on Wednesday.

Children pulled colorful balloons amid folk music. Groups of men in sun hats bang out the rhythm on the long drums as local musicians picked up the beat on their country-style electric guitars. All people there were enjoying the event – elegantly dressed women danced, teenagers snapped selfies and families had picnics.

“The town is usually quiet. Tourists flock to the festival every year, helping to boost the local economy here,” said Pat, a tourist van driver.

“Locals are delighted to join it, like a big party, from making candle carvings to parading, which helps to preserve the tradition and craftsmanship. It’s the charm of the festival, something more important than tourist revenue,” said the local driver.