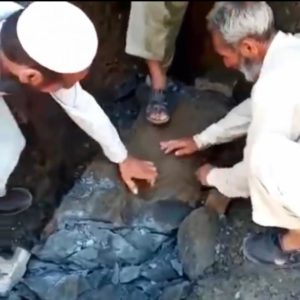 Status was discovered by locals during construction activity in the area

A Buddha statue discovered during construction activity in K-P’s Mardan district was smashed into pieces on Saturday by locals.

The statue was discovered by locals in the Takht Bhai area of Mardan. A video available with The Express Tribune shows locals smashing the statue using a sledgehammer.

A senior officer of the Tourism Department said authorities have taken notice of the incident and are looking into the matter.

Director Archeology Abdul Samad said the area was traced and those involved in vandalism will be held accountable. “We have located the area and we will soon have those involved arrested,” he said.

The Takht Bhai area is a tourist destination for people from Sri Lanka, Korea and Japan since it was a part of the Gandhara Civilisation – one of the earliest urban settlements documented in the history of the subcontinent.

Excavated in 1836 for the first time, archaeologists have excavated hundreds of relics made of clay, stucco and terracotta in the area.