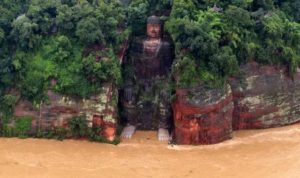 (CNN)Floods in southern China have caused water from the Yangtze River to rise and reach the toes of a famous towering statue of the Buddha — reportedly for the first time in decades.
Leshan’s Giant Buddha, a 233 foot (71 meters) sitting buddha carved out of a hillside around 1,200 years ago, is part of a UNESCO World Heritage Site in China’s Sichuan province.
It usually sits comfortably above the waters of the Yangtze — the world’s third longest river — and tourists gather at its base.

China’s Ministry of Emergency Management pegs the direct economic cost of the disaster at $21 billion in destroyed farmland, roads and other property.
Beijing has so far been able to secure food supplies by importing vast amounts of produce from other countries, and by releasing tens of millions of tons from strategic reserves — but analysts warn that such measures can only be useful for so long.