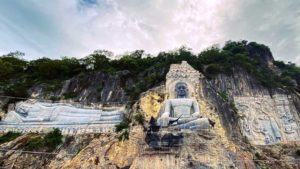 The Battambang provincial Department of Cults and Religions is seeking permission for sculptors to make modifications to the Buddha statues which are under construction on the face of Phnom Sampov Mountain after inaccuracies were discovered during a recent inspection.

However, he said he had never seen the blueprint and only after a practical examination did he realise that there was a scriptural error in the statue of Buddha’s enlightenment.

“They requested a statue depicting the enlightenment, but when it was built it turned out to be a statue of Siddhartha [Buddha] triumphing over Mara,” he said.

He added that the construction should follow the book “Templates of Buddha Statues in Cambodia” released on September 1, 2014, by the religions ministry and recognised by the Ministry of Culture and Fine Arts.

Constructing statues of Buddha that are markedly different from the designs approved by the religions ministry could lead the younger generations to misunderstanding the religion and could draw public criticism, he said.

“Firstly, the younger generations who do not have a deep knowledge of Buddhism will not know the exact style of Buddha being portrayed such as an image of his enlightenment. Secondly, the public will criticise the authorities or experts saying they are ignorant,” he said.

A Facebook user named Siv Jing who claimed to be the son of the sculptor said the statue of Buddha triumphing over Mara was commissioned by two Buddhist followers identified as Tang Meng Hun and Sreng Sen.

Siv Jing said the statute of Buddha triumphing over Mara was meant to be a guardian of peace for the nation and to show that no enemy can persecute Cambodia. Furthermore, he said it was also meant as a symbolic protector of Cambodian children’s health from plagues like Covid-19.