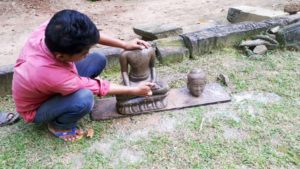 The torso and head of a Buddha statue that was excavated by Apsara Authority’s archaeologists in the Tup Khang Lech temple area in Angkor Thom, Siem Reap are being kept in Nara Institute for restoration.

Nara Institute archaeologist Sok Keo Sovannara, who was completing repairs at the temple’s site, said on Tuesday that parts of the statue were discovered on October 24 and sent to the institute the same day.

“The ancient torso and head were discovered separately. They were estimated to have been made during the central era [1431-1863]. The cross-legged body was buried over one metre into the ground, whereas the head was found about three metres from the body,” he said.

Tup is a small temple area in Angkor Thom that is not of much interest to visitors because of its location in the forest, but is still significant for researchers.

It is the last temple built from sandstone in the 9th century as a dedication to Brahmanism. It was the idea of an uncle of King Yasovarman I. Not many people know of the temple,” Keo Sovannara said.

There are two temples in the heritage site, namely Tup Khang Lech (in the West) and Tup Khang Keut (in the East).

Apsara Authority spokesman Long Kosal said the statue was taken to Nara Institute for cleaning and repairs, and to be registered for research and study.

“The restoration works of the temple are near completion. However, [we] need to conduct more studies on certain parts of the structures and foundations. That is why we need to excavate, repair and conduct research,” he said.