Outdoor religious statues continue to be destryed across China, local officials in charge threated to be dismissed if they disobey the central government orders.

In mid-June, a 29-meter-tall carving of Shakyamuni Buddha on a mountain in Fengman district of Jilin city in the northeastern province of Jilin was destroyed with explosives because local authorities claimed that it was “too tall.” The demolition was carried out with government officials present on site.

According to informed sources, it took eleven years to carve the Buddha, and it was in the process of being polished and gilded when it was blown up. The work, funded by an individual, cost about 3 million RMB (about $ 420,000). 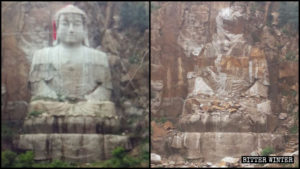 Ahead of the demolition, officials proclaimed that all religious statues are being dismantled across the country, and no one can stop the process. They threatened to detain the funder of the carving if he resisted the demolition. A government insider revealed to Bitter Winter that had the statue not been destroyed, all local officials in charge were to be removed from their posts.

Over in the central province of Henan, government officials ordered to demolish a 10-meter-tall statue of Shakyamuni Buddha outside Longxing Temple, located in a village of Mengjin county under the jurisdiction of Luoyang city. According to informed sources, local government executives were threatened by their higher-ups to leave office should they fail to demolish the statue within three days.

The demolition work took two days to complete, government-hired workers toiling non-stop on July 17 and 18. A village official said that all outdoor religious statues are being destroyed on the central government’s orders. “No one in China has greater power than Xi Jinping. Who dares resist him?” the official added.

According to some villagers, to protect the statue from demolition, the temple’s congregation covered it with sunshade nets, but this didn’t help to save it. 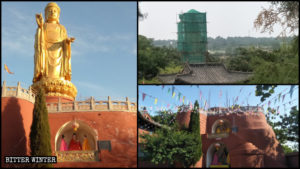 “There is nowhere to seek justice. It’s no different from the Cultural Revolution – all things related to Buddha are being torn down and destroyed,” a believer said helplessly. “The CCP fears that people will start worshiping Buddha and will not believe in the CCP anymore. If all people become religious, won’t it mean that the CCP is done for? That’s why these urgent orders to destroy all these icons have been given.”

Not only Buddhist statues are demolished; even the word “Buddha” in public is not allowed to exist. In spring this year, officials ordered to remove a stele with the Chinese word for “Buddha” outside a Buddhist temple in Lushuihe town of Fusong county, administered by Jilin’s Baishan city, claiming that “government regulations forbid open-air religious signs.” The stele that had been displayed for over ten years was left lying on the ground.