The anthropomorphised Buddha made way for narrative reliefs depicting his life, replete with iconography borrowed from Graeco-Roman and subcontinental cultures. 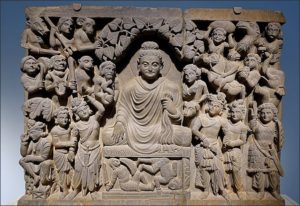 Gandharan Sculpture: A genre of sculpture that arose and developed between 100 BCE and 700 CE in the ethnically diverse and religiously tolerant cultures of the ancient region of Gandhara, in the northwest of the ancient Indian subcontinent. The body of sculptural art from this period, in the form of reliefs and freestanding work serving mostly as expressions of Buddhist faith, is unique for its syncretic character, combining stylistic influences of the Hellenistic, Persian and Kushan cultures. Gandharan Buddhist sculpture is particularly noteworthy for introducing anthropomorphic depictions of the Buddha, bodhisattvas and associated figures.

Gandhara was one of the sixteen mahajanapadas or kingdom-states of ancient northern India, and was established as a province or satrapy of the Achaemenid empire in the early fifth century BCE by Darius I, after which it experienced several waves of ethnically diverse dominion including conquest by Alexander the Great. This cosmopolitan culture developed a distinctive visual vocabulary that drew predominantly on the art that had historically received imperial patronage — from the Macedonians, Greco-Bactrians (Hellenistic), Sakas and Indo-Parthians — and Buddhist traditions introduced largely by the Mauryans. The visual expression, particularly in the plastic arts, blossomed under direct and indirect patronage from the Kushan court until the late third century CE, and continued to evolve in scale and complexity well into the 6th century CE. It began to wane, however, with the arrival of Hephthalites and the subsequent shifting of the imperial attention of later dynasties towards other cultural centres in northern India such as Sarnath and Mathura.

Ancient Gandhara was a vibrant crossroads between the classical cultures of the Mediterranean region and those of South Asia, reflected in the Graeco-Buddhist art of the area. The boundaries have been redrawn numerous times due to shifting geopolitical control in the region. Yet, amidst this flux, historical centres of Gandhara’s cultural production — Taksashila (now Taxila), Pushkalavati (now Charsaddha) and Purushpura (now Peshawar) — remained vital and relevant, aided by Gandhara’s position on the Silk Road. The variety and richness of the artistic traditions in the region were also due in large part to the varied levels of patronage from the many donors who funded everything from small figurines to entire rows of relief panels and sacred reliquaries.

The earliest examples of iconic sculpture in the early Graeco-Buddhist Gandhara region date back to the late first century BCE, under Saka rule, the only surviving examples of which are reliefs of bodhisattvas that were likely part of the stupas and monasteries in the region. The figures were rendered in a rigid but distinctly Graeco-Roman style, as seen in their angular build and the folds of their clothing. Later, from the first century CE onwards, bodhisattvas were portrayed more naturally as subtly toned figures draped in heavy robes.

They were individualised by their moustaches and hairstyles, most of which were variations of the top knot: a Gandharan interpretation of the Buddha’s ushnisha(cranial protuberance). The bodhisattva, understood to be Maitreya, who is most frequently depicted during the Kushan period, is distinguished by his looped knot and the water flask in his left hand. Avalokiteshvara or Padmapani, who is otherwise the most popular bodhisattva in later styles, was shown holding a lotus. Bodhisattvas became more relevant to religious ceremonies over the first five centuries, even as the aniconic reliquaries holding remnants of the Buddha continued to be central to all worship.

The earliest anthropomorphic representation of the Buddha are a few relief images on the Bimaran reliquary in the late first century CE, based on iconography that was standardised later in that century and the next. With local and imperial patronage under the Kushan dynasty, artisans at Gandhara further developed the Graeco-Roman anthropomorphic style, and created the first large, free-standing stone images of the Buddha, sculpted from the blue or gray schist of the Swat valley.

The introduction of the anthropomorphised Buddha paved the way for narrative reliefs depicting his life, replete with iconography borrowed from Graeco-Roman and subcontinental cultures. These reliefs, usually depicting episodes from the Buddha’s last life, lined the dome and the base of stupas, and were read in ritual processions (pradakshina) clockwise around the stupa. For stupas of a large size, this narrative was supplemented by further tales from the Buddha’s past lives. The Buddha in this format is typically depicted as he is in statues: bearing a halo and no ornaments, wearing a long rippling robe, and having a calm countenance.

The women that appeared in the narrative scenes are modelled after yakshis but are shown holding cornucopias and wearing wreaths and robes very similar to the classical Greek style. Their depiction under trees and leafy canopies prefigures the salabhanjikas or “maidens of the sal trees,” a popular image in later reliefs and sculptures. In this phase of relief art, one finds a close reference to textual sources such as the Abhiniskramana sutra, indicating Gandhara’s closer affinity to the Central Asian and Chinese textual traditions than the north Indian oral traditions.

After the second century, the narrative element was discarded in favour of portraiture in reliefs and friezes, mainly of the figures of the Buddha and bodhisattvas. These were decidedly devotional images, and exhibited a clear hierarchy of scale — the Buddha was shown as a looming figure, surrounded by diminutive secondary figures. Solo reliefs such as these were positioned above entrances to the stupa, and along the upper part of the drum, signifying to devotees the sanctity of the monument.

The most common subject among these depictions was the seated Buddha in his moment of enlightenment under the Bodhi tree, which led early scholars to conclude that such images were part of a narrative series of the Buddha’s miracles. Friezes that did not feature the Buddha but showed lesser subjects, such as bodhisattvas and characters from the Buddha’s life, were used as stair risers, i.e., the vertical face of the stairs leading up along the stupa.

These stair-risers occasionally included non-Buddhist mythological figures carved in an emphatically Hellenistic style, either as an homage to the Indo-Greek culture or as a surviving remnant of it. These few but interesting examples include a series of spear-wielding Greek deities flanked by Corinthian columns, lines of inebriated figures courting a man who appears to be the Greek god Dionysius, images of Hercules carrying a vajra (a weapon representing a diamond and a thunderbolt), and the figure of the Atlas situated around the base of the stupa, symbolically holding it up.

Another sculptural element rendered in this style, possibly from the early first century, was a ring of garland-holders: a procession of male and female figures arranged around the surface of the stupa’s drum, carrying heavy garlands over their shoulders. Inscriptions suggest that donors sponsored figurines such as these, as well as large reliefs and free-standing sculptures. Aside from stupa reliefs, free-standing statues and busts of Greek deities such as Athena and Poseidon were also made at Gandhara, although in very small numbers and with unknown patronage.

Unlike the publicly visible emphasis on Buddhism, many finely made objects of personal use, such as combs and vases, almost exclusively featured Greek imagery. In particular, stone palettes (also known as toilet trays) which were used for mixing cosmetic pastes and powders, feature relief images of Greek gods, sea monsters and Nereids. These are unique to Gandhara, and were made between the second century BCE and the first century CE.

Gandharan sculpture can be broadly classified— based on the predominant medium used — into schist and stucco phases. Up until the third century CE, the stone used was almost exclusively grey, and occasionally green, schist. Stucco began to be used subsequently for reliefs as well as monumental free-standing statues of the Buddha and bodhisattvas because it lent itself better to modelling and was a more economical medium.

These were made with an armature of wood, rope and straw — and sometimes even a rough core of schist — which was then covered and modelled in stucco. Gaining popularity as Gupta influence began to affect the style at Gandhara in the fifth century, stucco effected a slimmer, smoother silhouette that was more rounded in the shoulders than stone. Metal and ivory were reserved for devotional objects such as reliquaries and life-sized bronze Buddhas and bodhisattvas, and secular objects such as coins, mirror handles and combs. When the use of bronze for statuary grew more common, stylistic variations began to emerge, such as the expansion of the halo to envelop the standing Buddha figure.

Although Gandharan art is defined by its repertoire of Buddhist sculptures, it also includes a small but important body of Brahmanical representations. Most noteworthy and prevalent among them are the relief sculptures of Skanda, shown here as a martial hero before he was absorbed into the Hindu pantheon. Depicted in a suit of armour with a bow strung across the chest and a sword in hand, Skanda is shown trampling a similarly clad figure with a buffalo head. This representation of the Mahishasuramardini narrative was carried out by Skanda and not Durga, and is the only known depiction of a variant of the popular myth.

The extant and preserved Gandharan art, mostly from early acquisition during the British Raj, which received a great deal of attention for its notably hybrid nature has been dispersed across various institutions globally, with the largest collection being housed by the Metropolitan Museum of Art in New York. Other notable museum collections include the Karachi and Lahore Museums, the National Museum in New Delhi, the Indian Museum in Kolkata and the British Museum in London.

This excerpt is taken from MAP Academy’s ‘Encyclopedia of Art’ with permission.

The MAP Academy is a non-profit, online platform — consisting of an Encyclopedia, Courses and a Blog — which encourages knowledge building and engagement with the visual arts of the region.