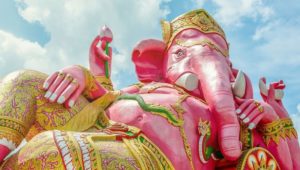 You may certainly have noticed that Hindu gods are very prominent in Thai culture. Thus, there are often images of these gods in Thai temples and at Thai shrines. In fact, Brahma, Vishnu and Shiva are the three most important Hindu gods representing the recurring and continual cycles of birth, life, death and rebirth.

This trinity, along with the god Indra, Ganesha and some enlightened divinities and demons, have been converted to the Buddhist doctrine according to Buddhist belief. Hence, these gods often occur as guardians of temples and monasteries. In addition, they may also be seen attending the Buddha on im­portant events in his life.

First there is Brahma (in Thai: Phra Phrom) who is the creator in the Hindu trinity. He is com­monly depicted having four heads and the book of Vedas in his hand. His female aspect is the goddess of learning, Sarasvadi, and his mount is the mythi­cal celestial swan called Hong or Hamsa. Brahma is considered a guard of doors and pediments in tem­ples. Furthermore, he is also popular as a protector of Thai hotels. Thus, in Thai culture, he is a deity of good fortune and protection.

In Thai art, Brahma is depicted in attendance to Buddhism, along with Indra, at the crucial events in Buddha’s life. Hence, he is also considered to be con­verted to Buddhism. By the way, Hindu gods might also be the subject of Thai songs here and there. For instance, Noi (Krissada Sukosol), singer of the band Pru, featured a song called ‘Brahma Brahma’.

Another important god is Vishnu who is the pre­server deity of the Hindu triad. In his hand, he often holds a disk and a conch shell. His mount is Garuda, the mythical bird that is half-human and half-eagle and the natural enemy of the Nagas. In other words, Garuda can be seen as the vehicle of Vishnu.

What is more, Vishnu’s avatar is Rama, the hero of the Ramakien tale. In addition, this god is also associated with Thai royalty since the kings of the Chakri dynasty have ‘Rama’ as part of their names. Similar to Brahma, Vishnu often functions as a (door) temple guardian.

Shiva is the destroyer and regenerator aspect of the Hindu trinity. He usually has a third eye that is centred vertically on his forehead. Fur­ther characteristics are a brahmanical cord across his torso and sometimes a crescent moon which is caught in his tangled hair. Pravati is his consort and his mount is the bull Nandi.

The image of Ganesha (in Thai: Phra Pikanet) is also very prominent in Thai culture. For example, there is the Ganesha Park in Nakhon Nayok which is considered a tribute to the elephant-headed god who is Shiva’s son. In Thailand, he is commonly seated at temple portals. What is more, he is also the patron of the arts and a protector of business.

Finally, we have the god Indra who is the god of Tavatimsa heaven. Hence, he is also the god of weather and war, wielding a lightning bolt and riding Erawan, the multi-headed elephant. Indra is a temple guardian of portals and pediments. He is also prominent in the Vessantara story which is the last life of the Buddha-to-be.

In addition, Indra occurs on mural paintings where he can be identified by his green colour. Along with Brahma, he is kneeling when attending Buddha during particular life events. Thus, it is indicated that the Hindu gods are subservient to Buddhism.

Summing up, we may claim that Hindu gods play a significant role in Thai culture. As a matter of fact, they not only show that Buddhism and Hinduism are intertwined but also rep­resent a subservience of Hinduism to Buddhism.

Sirinya Pakditawan is a ‘luk kreung’, or half-Thai, born and raised in Hamburg, Germany. She enjoys writing about Thailand, with a focus is on culture, art, history, tradition and on the people, as well as a mix of topics concerning Thai popular culture, travelogues and articles about Thai food.

Sirinya’s aim is not only to entertain you but to provide you with information and facts about Thailand, its culture and history that may not be generally known, in particular to the Western world. She has a PhD in American Studies from the University of Hamburg.

To read the original story, and many more, be sure to check out Sirinya’s blog: www.sirinyas-thailand.de