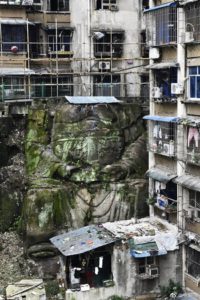 A huge headless statue of Buddha has been discovered propping up an apartment block in China.

Many residents only discovered their building was being held up by divine intervention when some vegetation was cleared, revealing the ‘thousand-year-old’ relic.

Measuring nine metres high, the Buddha was uncovered in a residential complex in Chongqing in southwest China.

It was surrounded by tall buildings and covered in greenery.

At some point an entire residential apartment block had been built on top of it.

The trees were removed during a reconstruction of the building’s external wall and residents were amazed to see what was beneath.

The headless statue is in a sitting position with two hands on its abdomen and a badly damaged left foot, according to the shine.cn news site.

‘The statue was here when I was young,’ said a 60-year-old resident.

‘There was a head on it but was later damaged.’

Another resident with the surname Yang, who has lived in the complex for several years, told the website there was also a temple near the statue many years ago, but it was demolished when residential buildings were built there in the 1980s.

‘I heard the Buddha statue was built nearly a thousand year ago,’ said Yang. The local authority of cultural relics has launched an investigation.