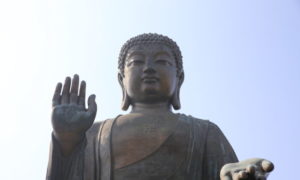 The unearthed remnants of an ancient Buddhist temple in Kyrgyzstan will be opened to the public in mid-September as part of UNESCO’s Krasnaya Rechka world heritage site, according to reports.

The ancient Buddhist temple, which was built over 1,000 years ago, was the second temple discovered near the northern part of Krasnaya Rechka (City of Nevaket) in 2010.

Valery Kolchenko, a local archaeologist, told Radio Free Europe that the temple is the only remaining site made entirely of clay. It housed a 36-foot statue of a Buddha in nirvana, parts of which were placed in a Russian heritage museum in St. Petersburg.

“All of our medieval archaeological sites are made of clay. We don’t have stone ones; we practically don’t have brick ones, with rare exceptions. It’s all made of clay,” Kolchenko said.

Kolchenko said the statue was built from brick “with clay smeared on top to form the shape of his clothes, hands, and head.” But he noted that the Buddha statue could not be seen in its entirety.

“A Buddhist couldn’t even see him in his entirety because the walls wouldn’t allow it. Only a part of the face, arms, and legs could be seen. But even to touch this was to acquire some form of sanctity,” he said.

The ancient temple was rehabilitated as part of a collaboration initiative between UNESCO and the European Union, and it was located along the Silk Road at the Chang’an-Tianshan corridor.

According to UNESCO’s world heritage website, the corridor stretches 5,000 kilometers (3,106 miles) from China’s Chang’an to the Zhetysu region in Kazakhstan. It includes 33 recognized sites, eight of which are in Kazakhstan, 22 in China, and three in Kyrgyzstan.

The three recognized sites in Kyrgyzstan are the City of Suyab—where the ancient site of Ak-Beshim is located—the City of Balasaun, and the City of Nevaket, which hosts the Krasnaya Rechka village.