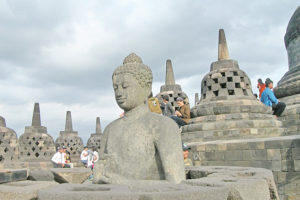 ANN/THE STAR – British statesman Stamford Raffles is noted worldwide as the founder of modern Singapore but not many know him as the discoverer of the iconic Borobudur Temple in Indonesia.

Regarded as one of the world’s greatest Buddhist monuments, it was built around the eighth and ninth centuries during the golden period of the successive Hindu and Buddhist dynasties, Sanjaya and Saliendra.

Unfortunately, the shrine had a very short life. It got abandoned possibly around the 15th Century and soon got hidden beneath layers of tropical foliage and volcanic ash.

The world forgot about its existence until 1814 when Raffles, who was then the Governor General of the British administration in Indonesia, heard about some mysterious ruins in the jungles of Central Java, and ordered the removal of the surrounding thick vegetation.

Under his supervision, the gigantic structure was cleared from the ruins, giving back to the world its architectural jewel.

He gave the find the name, “Borobudur” – Boro being the name of a nearby village and Budur meaning ancient in local Javanese.
A Buddha statue at Borobudur. PHOTO: THE STAR

Unquestionably, it’s a wondrous example of human endeavour. When viewed from a distance the huge grey structure, which amazingly stands almost intact since surviving a millennium of nature’s torment, strikes as a single large edifice. However, it actually comprises 10 superimposed terraces, six square-shaped ones at the bottom followed by three circular ones, each getting progressively smaller, with a single large dome adorning the apex, much like a multilayer wedding cake with a flower on the crest.

For the numerical-minded, the edifice consists of two million blocks of lava rocks, which reaches around 45 metres at its highest point and features nearly 1,500 carved story panels and 504 statues of the Buddha, each sculpted from a single block of stone.

Perched on the top of a natural hill, the monument was purposely designed that way for followers of Buddhism to humanly understand the spiritual thinking behind the teachings, by gradually ascending from one layer to the other, just like shifting from the world of desire and lust to the ultimate state of absolute nothingness.

As imagined, it’s one of the most visited sites in Indonesia. To avoid the crowd madness, it’s best to start early in the morning when the surrounding atmosphere is serene and the visual effect is mesmerising as the rays of the rising sun add some special effects on the stone.

The journey begins at the base of the temple. While there are flights of stairs on all four sides to take you straight up to the top, the usual way is to go round the pyramid in clockwise direction, while stepping up from one level to the other. This way, the walking distance is over four kilometres. It can be tiring but the rewards are high when passing along the enclosed galleries which are embedded with ornately carved bas relief panels depicting tales of Buddha’s life, earthly and spiritually. There’s also a fascinating panorama of 9th Century Javanese life, all carefully preserved to show the modern generation the customs and traditions of a race whose culture achieved its peak, and then collapsed ages ago. A breathtaking vista unfolds, when one reaches the open circular terraces, spread with several Buddha statues, some without heads because of looting, and 72 small bell-shaped structures called stupas, inside each of which nests a Buddha bust which as a sacred tradition can only be touched through the diamond shape openings in the wall.