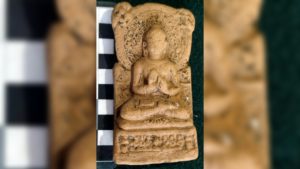 Udupi/UNI: A miniature sculpture of Lord Buddha was discovered at Alembi in 76 Badagabettu village, a local suburb, near here.

The sculpture was found in the debris excavated from a well near an abandoned temple. Prof T Murugeshi, Associate Professor in the Department of Ancient History and Archaeology, MSRS College, Shirva, said the sculpture’s height is 9 cm and its width is about 2 cm. It was made out of soft sandstone and looks like a replica of Saranath Buddha, he added.

“It is the first-of-its-kind miniature sculpture found in Karnataka as well as in Udupi. It was carved beautifully and he is seated on a lotus pedestal in Dharma Chakra Pravartana Mudre delivering his first sermon at a deer park. Below the seat, six disciples are seated on either side of the Dharma Chakra. Buddha is seen in clothes and he is wearing earrings. A small Ushnisha is shown on the top of the head. In the back of his head, a beautifully carved round lobe is also seen. On the top corners, two Yakshas and on either side of his backload, two-winged horses are also carved,” he explained.

Prof Murugeshi said the sculpture is in Gupta style. “In the same vicinity, a Brahmi inscription, dating back to the 4th to 5th century, was also discovered in the past. Traditionally, ancient Tulunadu was said to be ruled by the Kadambas of Banavasi. Guptas and Kadambas of Banavasi had matrimonial relations. Therefore, the discovery of Lord Buddha’s image is not unusual. But, the discovery has opened a new chapter in the history of the Udupi district and in the study of Buddhism in South India. Ganesh Raj Saralebettu, Shreyas, Nagaraj, Gowtham, Kavya, Bhavya, Harshitha, and Ganesh played a very important role in this discovery,” he added.