The Great Buddha statue in the ancient capital of Nara, western Japan, has undergone its annual cleaning ahead of the midsummer Bon Festival.

The 15-meter-high statue at Todaiji temple is dusted off every year on August 7. The cleaning is designed to prepare for the festival, when people pay respects to their ancestors.

On Wednesday morning, priests conducted a ceremony to temporarily remove the Buddha’s soul from the statue.

About 180 priests and worshippers then climbed onto the statue to clean and polish, using brooms and dusters.

Some were raised in baskets suspended from the ceiling of the hall housing the statue so they could clean parts those on the statue cannot reach, including its face and chest.

Many people came to watch the cleaning.

A student of cultural properties from neighboring Osaka Prefecture said it was her first time to see the process and she was very impressed that the work involves so many people. 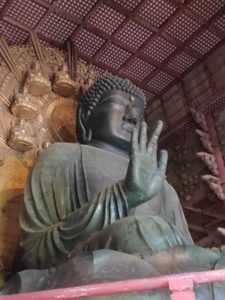