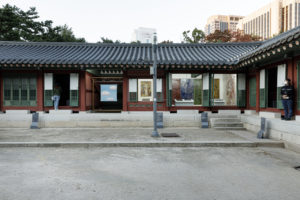 When you pass by the palace Deoksugung at the center of Seoul, you might notice the sign “Art Plant Asia 2020: Hare Way Object,” the title of the exhibition that offers a chance to appreciate the beauty of the architecture in the palace complex as well as the works of art from established artists across Asia.

The exhibition features the works of 33 artists installed inside and outside the palace complex in harmony with the beauty of its architecture. The palace had served the long line of the Joseon era’s kings until the very last, featuring some Western-style architecture introduced at the end of that era.

The building Jeonggwanheon — the first European structure in a royal palace here and which was used as a venue for music and parties – has been turned into an open-air theater for media works by Korean artists Kim Hee-cheon, Jung Eun-young and Cha Jae-min. The building that encompasses both Korea’s traditional architectural features as well as those of the West partly lost its original look during the Japanese occupation of 1910-1945, when it was used as a cafeteria.

“Chiasma” by Lee Bul is installed at Seogeodang in Deoksugung. (Art Plant Asia)

Works by Korean contemporary artists who have established global recognition such as Lee Bul, Yang Hae-gue and Park Seo-bo are part of the exhibition. The giant installation work “Chiasma,” by Lee Bul, is on display at Seogeodang – the only building at the palace with a two-tiered roof where King Seonjo stayed during the Japanese invasion at the end of the 16th century. Lee is one of the leading female artists in Korea whose “Cyborg” series has stirred the international art scene since the 1990s.

Co-hosted by Art Plant Asia and Seoul’s Jung-gu Office, the exhibition aims to provide a platform for Asian artists to foster international cultural exchanges during these pandemic times. The exhibition began on Oct. 23 and runs through Nov. 22. The palace closes Mondays.

As part of the exhibition, the Gallery Day event will be organized Saturday afternoon at the Jeongdong 1928 Art Center’s event hall in central Seoul, where representatives from Gallery Hyundai, Hakgojae and PKM Gallery will offer discussions on the Korean art market and where artists will speak.