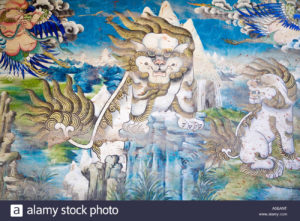 The Tibetan snow lion is a symbol of political authority, Tibetan political activist and writer Jamyang Norbu has told Down To Earth (DTE) in an interview.

“The snow lion is very important for the Tibetan world. That is why it is in the Tibetan national flag,” Norbu said, while speaking to DTE via Zoom.

The snow lion came into the spotlight most recently when Special Frontier Force (SFF) soldier, Tenzin Nyima was killed on the south bank of the Pangong Tso lake in Ladakh August 29, 2020.

“The snow lion is also the symbol of the Tibetan Government-in-exile as well as the SFF headquartered in Chakrata because it symbolises political authority. The lion is the king of beasts in most cultures and mythologies. Not just Tibetans and Indians, but British imperial power also used the lion as a symbol in the past,” Norbu said.

So how did the snow lion become a symbol of Tibet? “One theory is that it is because the lion is the symbol of the Buddha. The earliest iconography of Buddhism did not use an actual representation of the Buddha. It might have been done out of a sense of reverence. The whole art of depicting deities in stone did not exist at that time in India,” Norbu said.

Instead of depicting the human form, early Buddhists depicted the founder of the religion in the form of the Ashoka Chakra, which is today the symbol of the Indian Republic. Sometimes, the Buddha’s footprint was depicted instead of him.

“The term for lion in India is ‘Singha’ or ‘Singh’ in Punjab. In Tibet, the term is ‘Singe’. The terms are basically the same. The lion as an iconographic beast might have come to Tibet from India. Tibet does not have lions like India. Tibetans might have created this mythological creature, living in the snow. So he is all white but has all the qualities of a lion like courage, ferocity and nobleness. That became the symbol of old or imperial Tibet also,” Norbu said.

However, he also said it was possible that the snow lion could have already existed in Tibet.

“Buddhism came to Tibet rather late, around the 7th or 8th century. Pre-Buddhist kingdoms in Tibet followed the native Tibetan religion of Bon. They also had the stories of the snow lion. It could be that there was an earlier mythological creature native to Tibetans, with white body hair. It features in Tibetan literature and there are a lot of Tibetans in earlier times who claim to have seen it like in the Secret Biography of the Sixth Dalai Lama,” Norbu said.

The snow lion was also used on the banners and standards of the Tibetan Empire which stretched from Central Asia to the Bay of Bengal, Norbu said, adding that the snow lion was very important for Tibet.