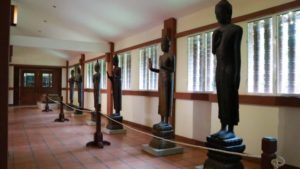 A sandstone Buddha Foot statue and six olden wooden carvings of the spiritual teacher are on display at the Preah Norodom Sihanouk-Angkor Museum in Siem Reap town, according to APSARA National Authority (ANA) on July 7.

ANA said in a statement that the seven artefacts had been restored by experts, after having been moved from Angkor Wat’s Preah Poan Gallery to Angkor Conservation, a compound under the purview of the Ministry of Culture and Fine Arts, “to be preserved, repaired and maintained for a long time”.

In the statement, the museum’s acting director Pen Chamrong explained that during a visit to Angkor Conservation, culture minister and ANA president Phoeurng Sackona had suggested putting the Khmer relics on public display. 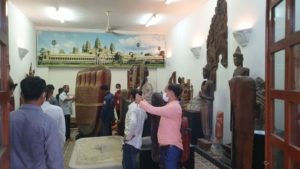 Kun Phally, a technical staff member and tour guide at the museum, revealed that the six wooden statues reflect the Bayon style of art to a certain extent, and suggested that they were made in the post-Angkorian period between the 14th and 18th centuries.

The Buddha Foot statue is 13cm high, with a 210cm-by-115cm base, he said, adding that documents from 1906 contain photographs of the statues amid a variety of other pieces at the Preah Poan Gallery, or 1,000 Buddhas Gallery.

Phally said his museum was the province’s first on archaeology and Buddhism, and chronicles history, art history, and the evolution of Khmer religious beliefs and practices throughout the ages.