A trip to Japan isn’t complete without at least one trip to a temple, which is ji or tera in Japanese. While you’ll likely find that temples are quite a common sight, not every temple has a Buddha statue with a hand the size of your body. These large, divine statues are known as Daibutsu, or “giant Buddha.”

Some of these Daibutsu are carved from stone, while others are forged using bronze. Whichever the case, each statue comes with its own interesting origin story— some of which are thousands of years in the making.

Here are five of some of the most iconic Daibutsu spread across Japan.
1. Todai-ji Daibutsu (Nara)
Photo: Thomas Faull
The bronze statue watches over Todai-Ji. 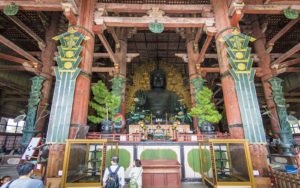 Todai-ji Daibutsu is found in Todai-ji Temple in Nara. The temple and surrounding park area are well-known for their friendly (sometimes not so friendly) deer, but the area is also steeped in history.

The statue takes a seated position and measures 15 meters in height. It represents Vairocana, the Illuminator, and has its hand out in a gesture of blessing or protection. The palm alone of this open hand measures an overwhelming 148 centimeters.

The statue, its surrounding halls and structures underwent a lot of hardships and damage over the years. Some of which were caused by fires, wars and earthquakes. But each time, the statue was dutifully repaired, allowing us to see it in all its glory to this day. 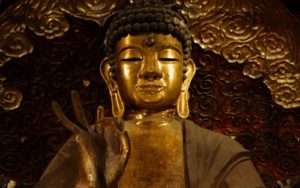 Under the gold leaf are hundreds of Buddhist sutras.

Shoho-ji Daibutsu in Shohoji Temple is often missed by international sightseers because of its location. If you’re on a road trip around Nagoya or Gifu it’s worth a visit to this Buddha statue which is the largest dry lacquer statue in Japan standing at 13.6 meters tall.

The temple itself dates back to 1638 but planning for the statue didn’t begin until the 1790s. The head priest at the time, Priest Ichu, decided to create the statue in the image of Shaka Nyorai, in the hopes of preventing large earthquakes and famine.

Creating the statue was a challenge because the interior framework was made of wood and bamboo while the outside was covered in clay. On the surface of the statue, the head priest set out to paste Buddhist scriptures over its surface, before covering it in lacquer and gold leaf. Priest Ichu traveled far and wide across Japan in search of enough scriptures to cover its surface. He passed away before the statue could be completed, and it wasn’t until 13 years later that his successor completed its construction.

The Shoho-ji Daibutsu is considered one of Japan’s Three Great Buddha Statues, along with the Kamakura Daibutsu and the Todai-ji Daibutsu. 8 Daibutsu-cho, Gifu-City – Map 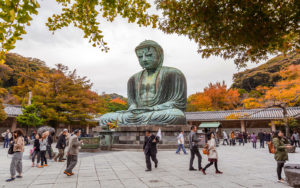 Just a stone’s throw away from Tokyo, the Kamakura Daibutsu is one of the most famous spots in the seaside city of Kamakura. Construction of this Great Buddha began in 1252 and it was originally inside a large hall, but typhoons and earthquakes damaged the structures and parts of the statue itself. Repairs were made during the Edo period (1603-1867), bringing the statue to the form we see today.

The bronze statue can be found on the grounds of the Kotoku-in Temple and stands at an impressive 11.3 meters tall, weighing around 121 tons.

Here, you can go inside the statue and look at the seams where the statue was made with 40 separate castings. On the outside, the bronze statue has a bluish-green color. It was originally covered in gold, but the weather has worn away all but small remnants of it on the statue’s cheeks. 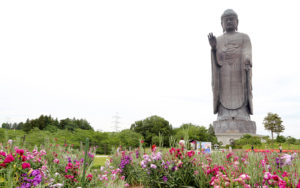 Ushiku Daibutsu in Ibaraki prefecture was built in 1993 to commemorate the birth of Shinran, who founded the Jodo Shinshu sect of Japanese Buddhism.

It is currently one of the tallest Buddha statues in Japan at an incredible 120 meters. Its height represents the 12 beams of light from Amida’s body, and its hand position, with its thumb and forefinger touching, represents acceptance of all sentient beings. Inside the statue, there is a room filled with 3,400 smaller golden statues and rooms for things like sutra copying and calligraphy. You can even ride an elevator to the top of the statue to see what the Great Buddha statue sees.

While the other Buddha statues we have covered so far are set on temple grounds, this one is not. Instead, you can find the statue towering over a luscious park. The park has a cemetery, gardens and most surprisingly, a petting zoo.

Admission: ¥800 (includes entrance into the park and statue)

The halo creates a memorable silhouette.

Takaoka Daibutsu in Toyama prefecture is a bronze statue with a memorable silhouette. The characteristic circular halo behind the statue’s back is a simple symbol for Amida.

It is 18.58 meters tall and was completed in 1933. However, the original was built in 1745 and was made out of wood. After being destroyed by two successive fires, the only logical progression was to build another version that was a little more fireproof. Copper was chosen as the material for the new statue because of Takaoka’s long history in the copper industry, and the statue was made entirely by the hands of local craftsmen.

The grounds where the statue stands are fairly small, and you won’t find any showy gardens or lavish temples, but you can enter the statue to take a peek at the wooden head of the previous statue, that somehow survived the fire.