The Mahabodhi Temple is believed to mark the place where the Buddha realized enlightenment. This is the central, foundational event in the tradition of Buddhism. But the temple was neglected for centuries, and its origins forgotten, until it caught the attention of European scholars and archeologists in the 19th century. Today the restored temple is an object of reverence but also of heated sectarian dispute between Buddhists and Hindus. It has twice been the target of terrorist attacks.
The temple is located at Bodh Gaya, in the Bihar state of north eastern India, which borders Nepal. Buddhist history says that it was here that the Buddha sat in meditation under a pipal tree (Ficus religiosa), called the Bodhi Tree, until he realized enlightenment. Historians aren’t certain exactly when the Buddha lived, but the enlightenment probably happened late in the 5th century BCE, give or take.
According to Buddhist history, the first Mahabodhi Temple at Bodh Gaya was built by the Emperor Ashoka, a patron of Buddhism who reigned most of what is now India and a great deal more from about 269 BCE to 232 BCE. The stump of an Ashoka Pillar is still standing there. This temple may have been replaced in the 1st or 2nd century CE. The current temple probably dates to the 5th or 6th century CE, and it remains one of the oldest brick structures in India.
A Long Stagnation

Although Buddhism began in India, beginning about the 6th century CE it began a gradual decline. By the 12th century most of what remained of Buddhism on the Indian subcontinent was concentrated in three large monasteries in what is now the Indian state of Bihar and in two more located on the lower Ganges in what is now Bangladesh. These were all destroyed by invading Turkic armies in the late 12th and early 13th centuries. There may have been a few Buddhists in Bodh Gaya as late as the 15th century, but not after.

Although the memory of Mahabodhi Temple and the significance of Bodh Gaya were lost in India, they were not forgotten in other nations where Buddhism flourished.
A Chance Discovery
Dr. Francis Buchanan (1762-1829; sometimes Dr. Francis Buchanan-Hamilton) was a Scottish surgeon and amateur botanist who spent several years in India and southeast Asia. At one point Buchanan was part of a diplomatic expedition to Burma, now called Myanmar. In 1797, as part of his work in Burma, he published an essay titled On the Religion and Literature of the Burmese. The essay contains what is believed to be the first usage of the English construction Buddhism.
Buchanan later spent time in Nepal, mostly cataloging native plants. Nepal was predominantly Hindu, but Buchanan realized the Newar people of the Kathmandu Valley employed symbolisms similar to the Buddhists of Burma. He proposed there was a connection between the Newar and Burmese religions.
In 1811, this same Dr. Francis Buchanan and some assistants were traveling in northeastern India when they came across the ruins of an old temple. The ruins were inhabited by a group of Hindu ascetics who did not know its origins. But Buchanan recognized that the weathered stone carvings of the temple included images of the Buddha, very much like what he had seen in Burma.
Then Came the British Orientalists

At the time Buchanan made his discovery, India had been governed by the Muslim rulers of the Moghul Empire since the 16th century. But the British East India Company had moved in, building factories and trading posts and establishing communities of British expats. By the time Buchanan found the ruins of the Mahabodhi Temple, the East India Company was the real power in India. And many of the British expats in India were genuinely interested in learning about India’s history and culture.

These orientalists, as they were called, realized that India must have an ancient history, but the Indians themselves seemed to know little about anything that had happened before the Moghuls. Eventually some westerners gained literacy in Sanskrit and could read old texts themselves. They also consulted classical Greek texts about India dating back to Alexander the Great’s time, and very slowly a long-lost history of ancient India began to emerge.

A British diplomat in Nepal named Brian Hodgson (1800-1894) made enormous contributions to understanding early Buddhist history and its origins in India. Largely thanks to his work, westerners finally came to understand the significance of the Buddha. And they realized the significance of the Mahabodhi Temple as marking the place of the Buddha’s enlightenment.
The Mahabodhi Temple Restored

In 1857 a revolt against the East India Company caused the British government to step in and assume direct control of India. This marked the end of the Mughal Empire and the beginning of the British Raj. In the 1880s the British colonial government of India decided to restore the Mahabodhi Temple, in response to complaints about its deplorable condition. The government turned to Sir Alexander Cunningham (1814-1893), a British Army engineer, to lead this effort.

Cunningham’s excavations found remnants of the earlier temples, including some of the original temple built by Ashoka. Among other long-lost objects, he located the Vajrasana, or “diamond throne,” a carved stone slab thought to have been placed by Ashoka on the very spot he believed the Buddha must have meditated. He also replaced the dying Bodhi tree with a sapling from the same plant, and that’s the tree that stands there today.

Still, more work needed to be done. In 1885 the British poet Sir Edwin Arnold published a series of articles about the Mahabodhi Temple that drew more attention to the site. Asian Buddhists began to speak up, including Anagarika Dharmapala (1864-1933), a Buddhist activist of British Ceylon (now Sri Lanka) who also helped initiate an independence movement. Dharmapala campaigned to have the temple returned to Buddhist control, a request that met with resistance from Hindu clergy. Many Hindus had come to regard the Buddha as an incarnation of Vishnu, and they considered Mahabodhi to be their temple, too, especially since a sect of Hinduism had been using it since the Buddhists abandoned it.
An Uneasy Compromise

After India gained its independence from the United Kingdom in 1947, the Mahabodhi Temple complex became the responsibility of the state government of Bihar. Bihar established a management committee to be made up of five Hindus (including the chair) and four Buddhists. The Bodhgaya Temple Management Committee still is in charge today, although in 2013 policy was changed to allow the Gaya District Magistrate to act as chairman even if he isn’t Hindu. There is also an advisory committee that includes representatives of Buddhism from several other countries.

This arrangement has never satisfied most Buddhists, who want complete control, and who want Hindu symbols, such as representations of Vishnu and Shiva, removed from the temple. The controversy is ongoing.
Terrorist Attacks

In July 2013, a series of ten bombs went off around Mahabodhi. The temple, and the Bodhi tree, were undamaged. Five people, including two Buddhist monks, were injured. Three other bombs planted in the area were discovered and defused. Eventually members of Muslim group, the Indian Mujahideen, were arrested and convicted of the bombing. Another bombing was attempted in 2018, while 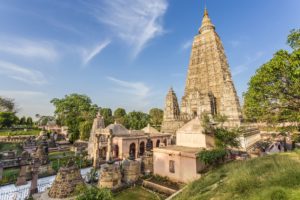 His Holiness the Dalai Lama was in Bodh Gaya. It’s possible His Holiness was the target. Fortunately there were no serious injuries or damage. Those convicted of this bombing were members of Jamaat-ul-Mujahideen Bangladesh, also a Muslim group.
The Temple Today

The temple today is a UNESCO World Heritage site. According UNESCO, the present temple is one of the earliest and most imposing structures built entirely in brick from the Gupta period. The temple complex covers nearly 12 acres; the main pyramid temple is 180 feet tall. Next to the temple is a huge pipal tree (the one planted by Sir Alexander Cunningham in the 19th century) said to be a direct descendant of the Buddha’s Bodhi Tree.