Chaktomuk Temple, a unique ancient Buddhist shrine in Cambodia, is gradually regaining its popularity as a heritage site destination as more tourists visit the attraction following its restoration last year.

Chaktomuk Temple is located within the vicinity of the Bakan temples, also known as the Preah Khan Kompong Svay archaeological complex, built between the 11th and 14th century about 100km east of Angkor in Preah Vihear province.

Prior to restoration, the upper half of the Chaktomuk Temple structure had collapsed, with the four back-to-back Buddha statues covered by overgrown plants which had eroded their surface.

The Ministry of Culture and Fine Arts has designated Chaktomuk Temple as one of Cambodia’s rarest and most unique. At an honorific ceremony, Deputy Prime Minister Men Sam An, who was appointed to lead the temple’s restoration, said the work was carried out with four purposes.

Chaktomuk Temple’s design is remniscent of the world famous Bayon Temple’s four-smiling faces statue in the Angkor Archaeological Park, built as a dedication to the four-faced Avloketesvar (a bodhisattva who embodies the compassion of all Buddhas).

“As far as I know, Chaktomuk is the only temple with surviving joined back-to-back Buddha statues in the country. It is a unique temple.”

He continued that Chaktomuk Temple was built in 12th century during King Jayavarman VII’s reign. In that period, the king led his men to the Bakan temples to fight back Champa’s troops before recapturing Yasodharapura (Angkor city) from invading Chams in 1181.

“Now at Wat Tralaeng Keng, we can only see the statues’ feet. According to locals, the Buddha statues were dragged to Tonle Sap lake at the east of pagoda.

“Locals claim that they found the Wat Tralaeng Keng statues in the Tonle Sap lake, saying Siamese troops dragged them there. Fishermen say that they know it is the statues, but they are not capable of lifting them out of the water.”

Chan Theoun now plans to resurface the statues from the lake.

“It is an initiative of my own. I stood on the river shore to look at where locals claimed they made the finding. I want to hire a sand dredger and a crane to lift the stone back to its original location. However, I have yet to realise my dream as I don’t have the time or the budget,” he said.

There are many temples in Preah Khan Kompong Svay, such as Preah Domrei, Preah Thkoal, Preah Stung, Mebon and Chaktomuk.

The heritage site was left abandoned for many years, but after restoration the Chaktomuk Temple structure was restored to its original height of ten metres.

“Because the road condition is not very good, we don’t see many people visiting on weekdays. But on weekends and especially national holidays, there are many visitors.

“Now, no one drives past without visiting Chaktomuk Temple. They will make a stop to take photos and place offerings for prayer,” said Heritage Authority officer Lee Phearum, who is stationed at the temple with other rangers. 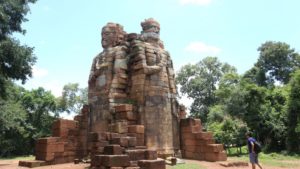