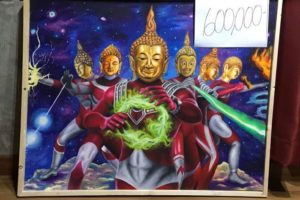 BANGKOK (Reuters) — A group of Buddhist hardliners in Thailand filed a police complaint against a young female artist on Wednesday over paintings that depict images of the Buddha as the 1960s Japanese superhero character Ultraman.

The complaint over four paintings, displayed earlier this month at a shopping mall in northeastern Thailand, highlights how ultra-conservative Buddhist groups have been emboldened to go farther than establishment religious authorities in combating perceived threats to their faith.

Buddhism, followed by more than 90 percent of Thais, is one of three traditional pillars of Thai society, alongside the nation and the monarchy.

The paintings were removed from the exhibition and the artist — a fourth-year university student whose name has been withheld for her safety — had to publicly apologize to northeastern Nakhon Ratchasima Province’s chief monk in front of the provincial governor.

In the past, that might have been the end of the incident.

But on Wednesday, the hardline group Buddhist Power of the Land said it had filed a police complaint against the artist and four others involved in the exhibition, on the grounds that comparing the Buddha to an action figure was disrespectful.

The group wants the five prosecuted under a law against insulting religion that allows imprisonment of up to seven years.

Under Thai law, police must investigate a complaint and recommend whether there are grounds to pursue criminal charges, a process that usually takes at least seven days.

Pongporn Pramsaneh, director of the Office of National Buddhism, told Reuters he considered the matter closed after the public apology.

“Whoever wants to take legal action, we will not get involved,” Pongporn said.

Few have been jailed under the law, though there have been some cases of fines, including against tourists with Buddha tattoos or souvenir statues.