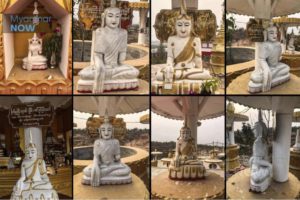 Former dictator Than Shwe and other top officials donated the carvings, whose strange gestures were a superstitious bid to keep power

At sacred sites across Myanmar, worshippers prostrate before statues of the Buddha seated in the lotus position. Some are carved out of gorgeous marble, others fashioned with base metals or adorned with gold leaf.

But they all depict the same world-famous posture: hands in the lap beneath a contented visage, the quintessential picture of composure and serenity.

Unfortunately, the sculptors who created the seated Buddhas at the Seinda Muni monastery in Naypyitaw – a favourite worshipping spot for senior military officials – didn’t get the memo.

With their goofy V-shaped smiles and bizarrely large left hands snaking behind their backs, the statues look as though a prankster has manipulated them on Photoshop – except they’re real.

When images of the strange creations went viral on Facebook in 2017, the Ministry of Religious Affairs investigated. Now, after meditating on the issue for some time, officials have decided the statues must be removed.

“The statues are unpleasant to look at and upset the viewers, contradicting the sense of calm and peace brought about by Buddha,” the ministry said in a statement on Tuesday. 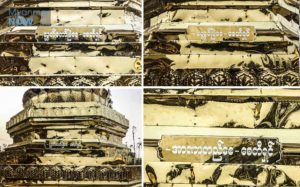 The controversial stupas in the monastery are still standing

It’s not just the statues’ appearance that has offended worshippers though. The statues were donated by senior military figures, including former dictator Than Shwe, in what was seen as a superstitious attempt to shore up their power.

“These statues go against Theravada Buddhism, sculpted with the intention to bring about personal gain, incorporating wrongful spiritual practices, and the influence of other religious ideals,” the ministry’s statement said. “The statues were made to enhance the wealth and power of the donors.”

At least 60 of the statues had already been removed from the temple when Myanmar Now visited earlier this week.

The Sangha Maha Nayaka committee, the body that governs Myanmar’s monks, decided that the statues must be removed by July 6.

The monastery’s abbot, Ashin Sandimar Thara, was summoned to the Sangha office in Naypyitaw this week to be told about the instruction, Zar Ni Win, the religious affairs ministry’s vice permanent secretary, told Myanmar Now. 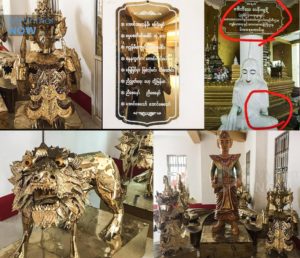 Among the civilian officials who donated are former Food and Drug Administration director Than Htut, who is now on trial for corruption, and Aung Myint Oo, vice chair of the Ministry of Construction.

Police general Than Tin Aung and General Tayza Kyaw of Western Command also have their names on plaques at the monastery. But plaque listing the names of ousted former General Thura Shwe Mann’s family members has been removed.

The monastery also contains stupas that have been given names like “long lasting power” and names that closely resemble the donors’ names. One stupa donated by someone called Thiri Swe is named Thirishwesin.

When asked by Myanmar Now about the stupas, Zar Ni Win said: “We’ll remove them if they’re inappropriate. We need to clear everything that goes against the standards.”

A person with close ties to Seinda Muni monastery told Myanmar Now that representatives of Than Swe and Min Aung Hlaing visit often.

The abbot, Ashin Sandimar Thara, declined to be interviewed. 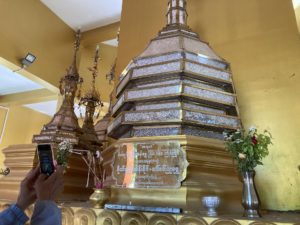 A photo posted online shows a new Buddha statue where one donated by the military-backed Union Solidarity and Development Party used to be.

“This is news to me,” USDP spokesperson Thein Tun Oo told Myanmar Now. “I’ll have to learn more about it.”

Officials began donating more of the statues after 2010, when the transition to partial civilian rule made military figures nervous about their positions, said a source with close ties to both the military and abbot Ashin Sandimar Thara.

As far as the donors are concerned, it was money well spent.

“Take for example, the current labour minister U Thein Swe,” said the source. Thein Swe is a former army general who also served as a minister under the previous two governments.

“He’s served throughout three governments… so others have followed his example, because it seems to work.”