HIROSHIMA — A large Buddha statue that was once enshrined near the hypocenter of the atomic bombing after World War II to pray for the victims, and whose whereabouts had since been long unknown, has been returned here for the first time in about 60 years following efforts by a temple priest. 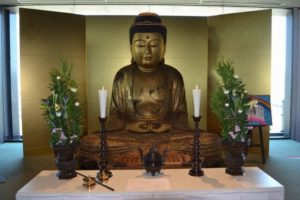 The “Hiroshima Daibutsu” wooden statue, as it’s affectionately called, was installed at a temple near ground zero in 1950 to pray for the repose of the souls of victims of the Aug. 6, 1945 atomic bombing. On July 1 this year, it was back in Hiroshima again after it was sent from a temple in the town of Ando, Nara Prefecture.

The approximately 4-meter-tall, 400-kilogram Amitabha Tathagata seated image is said to have been originally created in Yamagata in northern Japan in around 1200 AD during the early Kamakura period. The gilded image was disassembled before it was recently transported to Hiroshima, to be displayed at Hiroshima Orizuru Tower commercial complex adjacent to the Atomic Bomb Dome in the city’s Naka Ward. During an eye-opening service on July 1, 24 priests from across different religious sects gathered to recite sutras before the statue.

In 1950, five years after the atomic bombing, the Great Buddha was enshrined at Sairenji temple rebuilt after the war on the eastern side of the Atomic Bomb Dome, providing a solace for people in the depths of despair on the heels of the nuclear devastation.

At that time, a hall to enshrine the statue was built using donations from citizens, and a lively parade showcasing the statue was held. Every year on Aug. 6, the Hiroshima atomic bomb anniversary, a large-scale memorial service was held before the statue, but after it was moved to another temple in 1955, its whereabouts had become unknown by around 1960.

Tanaka only remembers hearing it was “a statue from Hiroshima,” but his instincts told him that it was the Hiroshima Great Buddha when he saw an image of it in a photo book at a secondhand bookstore in Osaka. After a study by the Nara National Museum in the city of Nara, it was identified as the very statue from Hiroshima. As Tanaka thought about the feelings of Hiroshima residents who worshipped the Buddhist image after the war, his desire to return the statue to where it belonged grew stronger.

The homecoming project, however, hit a snag including how to find a host place. In April 2022, a planning committee was set up with the cooperation of business figures and some 12.5 million yen (approx. $91,000) was raised through crowdfunding. Despite various hurdles, Tanaka never thought about quitting the project, and he recalls feeling that the Buddha statue was telling him, “Do the right thing.”

After the July 1 ceremony, Tanaka said, “I assume the Great Buddha is happy, too. The statue paves the way for peace, but it’s us people who walk down that path.”

Tetsuya Matsuda, head of the planning committee, commented, “I hope this Great Buddha will be of help in disseminating a message of peace.”

The statue will be put on public display until Sept. 1, before being returned to Gokurakuji temple in Nara Prefecture. A memorial service will be held on Aug. 6, the 77th anniversary of the atomic bombing. The planning committee is continuing to accept donations for a periodic homecoming for the statue to Hiroshima. The committee can be reached by phone at 082-228-0131 (in Japanese).