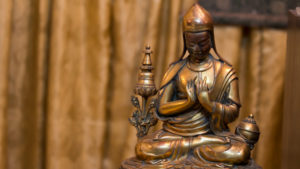 Bangladesh is a religiously diverse country, with people from every religion and all walks of life living together. Although Buddhism comprises a very small percentage of the population, there are Buddhist temples and monasteries aplenty, especially due to Bengal’s rich Buddhist heritage.

These places of worship exude peace and tranquillity. Some are decorated exceptionally well, some preserve strong religious values and sentiments, and some have earned respectable titles over the years. Here are the top 5 Buddhist places in Bangladesh.
For all latest news, follow The Daily Star’s Google News channel.

Situated atop a high hill in Balaghata area, it is abundant with greenery and natural beauty all around as it is with religious sentiments. The surrounding areas provide a picturesque view of the beautiful neighbourhood. The Golden Temple houses the second largest Buddha statue in Bangladesh.

This sacred place of worship is truly an architectural marvel. The majestic gate of the temple and surrounding railings are decorated with golden artefacts and murals. The magnificent dome at the top of the temple is also decorated in various forms. The twelve Buddhist statues outside only add to the opulence of the place.

Somapura Mahavihara located in Naogaon is a historical site. Centuries ago, it was a renowned intellectual centre. Its functional layout perfectly adapted with Buddhist religious views and with its clean lines and carved decorations, this structure influenced Buddhist architecture for years. It is now listed as a UNESCO World Heritage Site.

It boasts a quadrangular outer structure with a cruciform temple in the centre. The thick walls are in fact cells were monks used to live. The outer façade of the walls of the structure are decorated with ornamental bricks and terracotta plaques that display fauna, flora, and figures.

Kamalapur Dharmarajika Buddha Vihara is one of the central spots of Buddhist life and culture in Dhaka. Dating back centuries, it has a lineage of core Buddhist practices taking place here. It houses several important establishments such as a college, orphanage, clinic, and school, and has acted as shelter during the Liberation War.

This monastery has been visited by several dignitaries from home and abroad and is decked with a large collection of Buddha statues. The massive space is alternately known as the hotspot of Buddhist practices and culture in the country where holy occasions are celebrated with grandeur.

Dhaka International Buddhist Monastery plays a pivotal role in preserving Buddhism and its tradition and culture in Bangladesh. Among the many archaeological relics preserved, the two metal statues of Buddha from Thailand are its highlights.

The place of worship resembles is modern with exuberantly decorated golden panels and borders matching the sheen and shine of the statues. Every Buddhist religious occasion and festival is celebrated extensively within this monastery. Several dignitaries and diplomats continue to visit this place.

As the Chittagong district is densely populated with Buddhist populace, some of the most beautiful pagodas in the country can be found in this region, and Rajbana Vihara is one of them. This monastery is located under the green grove on several acres of verdant land, with the tranquil waters of the Kaptai lake all around it. Every year, the traditional Buddhist ceremony of Chibar Daan is held here.

The majestic white temple stands proudly with intricate details on its gables and turrets. The calm place is far from the hustle and bustle of urban life and is filled with the sound of nature and chirping birds. It is decorated with neat and vibrant sections of greenery and since a few years, a mummy has been housed in this monastery.