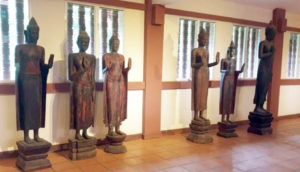 The centuries-old Buddha statues were taken by conservationists from the Angkor Wat’sPreahPoan gallery and restored by the Angkor Conservation’s experts, the news release said.

Pen Chamrong, acting director of the PreahNorodom Sihanouk-Angkor Museum, said the exhibition starting in May was conducted on the advice of PhoeurngSackona, the Cambodian minister of culture and fine arts, after those artifacts had been restored.

“This is the first time the PreahNorodom Sihanouk-Angkor Museum has received statues from the Angkor Conservation to exhibit at the museum,” Chamrong said.

Kun Phally, technical staff member and a guide at the museum, said that the six wooden statues were created between the 14th and 18th centuries, resembling the Bayon style.

“Through the photographs of old documents from 1906, these statues can be seen mixed with other statues, including the Buddha foot statue at the Angkor Wat’sPreahPoan gallery,” he said.

Prior to the COVID-19 pandemic, the Angkor Archeological Park, which was inscribed on the World Heritage List of the United Nations Educational, Scientific and Cultural Organization (UNESCO) in 1992, attracted up to 2.2 million international tourists in 2019, earning a gross revenue of 99 million U.S. dollars from ticket sales, showed official data. (PRD)