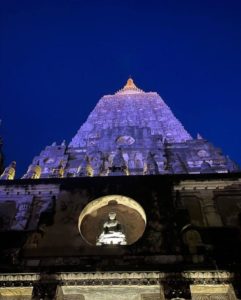 Siddartha’s Intent India, founded by the renowned Bhutanese lama, filmmaker, and author Dzongsar Jamyang Khyentse Rinpoche, has announced a new update to the ambitious initiative to illuminate the sacred Mahabodhi Temple in Bodh Gaya. Despite delays due to pandemic lockdowns and restrictions in India, the organization announced that the project is now poised to be completed, and an international competition is being held for the design of a light sculpture/art installation that will be featured in the outer and inner sanctums of the Mahabodhi.

The sacred endeavor, dubbed “Lighting the Mahabodhi,” is perhaps the most ambitious Buddhist light-offering ever. The objective has been to overhaul the temple complex’s aged lighting and electrical systems to create what may be the largest and longest-lasting Buddhist light-offering in history. Dzongsar Khyentse Rinpoche proposed the undertaking in 2015, and in 2017 received approval from the Bodh Gaya Temple Management Committee (BTMC) and the Gaya District Magistrate.

“The ambitious Lighting the Mahabodhi project is almost complete. For the final, most sensitive, and most important step, Siddhartha’s Intent India is announcing an international competition for the design of a light sculpture/light art installation in the outer and inner sanctums of the temple. The goal is to design and create a light art installation in these two sacred spaces in the heart of the temple,” Khyentse Foundation stated in an announcement shared with BDG.
x

The Mahabodhi Temple, among the most sacred pilgrimage sites for Buddhist practitioners, is a UNESCO World Heritage Site marking the place where the historical Buddha attained awakening. The original temple was commissioned by the Mauryan emperor Ashoka in the third century BCE. The present temple in Bodh Gaya has been dated to the fifth or sixth century CE, standing beside the descendent of the original Bodhi tree beneath which Shakyamuni Buddha sat, discovering the path to liberation from suffering.

The panel of judges for the light sculpture contest includes designers and artists, all of whom are inspired by the Buddhadharma and by the sacred heritage of the Mahabodhi temple.

“Dzongsar Khyentse Rinpoche’s vision is for modern design, thought, and creativity to be joined with this sacred space to create an art installation that has wide, youthful, and contemporary appeal, while preserving the historical authenticity of this most sacred of sites. We are calling for innovative, creative artists and light designers to join the competition,” Khyentse Foundation shared.

Entries for the competition should be submitted by 15 October.
Click here for full details and guidelines of the light sculpture competition

Undertaken with funding from Siddhartha’s Intent India and with support from Khyentse Foundation and Vana Foundation, the new lighting system will ultimately be owned by the temple committee. As well as highlighting the magnificence of the sacred temple and places of worship, the upgrades will improve safety and comfort for Buddhist pilgrims and have been designed to accommodate the specific needs of the temple and the rituals and ceremonies conducted there.

Siddhartha’s Intent is an international collective of Buddhist groups supporting Dzongsar Khyentse Rinpoche’s Buddhadharma activities by organizing teachings and retreats, distributing and archiving recorded teachings, and transcribing and translating manuscripts and practice texts. Khyentse Foundation was established by Rinpoche in 2001 with the aim of promoting the Buddha’s teaching and supporting all traditions of Buddhist study and practice. The foundation’s activities include major text preservation and translation projects, support for monastic colleges in Asia, a worldwide scholarship and awards program, the development of Buddhist studies at major universities, training and development for Buddhist teachers, and developing new modes of Dharma-inspired education for children. Vana Foundation states that its vision “is to revive Indian wisdom in contemporary India,” with a focus on Indian wisdom, farming, and culture, and with an aspiration to benefit all, especially India and its youth.

Prashant V., projects director for Siddhartha’s Intent India, has stated: “Since work began on the project in the spring of 2019, we have installed close to 1,500 lights in about 50 locations in the Mahabodhi Temple complex. We have laid over 10 kilometers of electrical and control cables, panels, outdoor enclosures, UPSs, dimming controls, and other state-of-the-art lighting and electrical infrastructure. We have also installed a brand-new sound system, within and outside of the main temple. We are eager and excited to make sure that this precious offering is both contemporary and classic and is built to survive the ravages of time so that it will continue to inspire people in the long run.”
Dzongsar Jamyang Khyentse Rinpoche. Image courtesy of Licchavi House

In addition to Siddhartha’s Intent and Khyentse Foundation, Rinpoche’s projects include: 84000, a non-profit global initiative to translate the words of the Buddha and make them available to all; Lotus Outreach, which directs a range of projects to ensure the education, health, and safety of vulnerable women and children in the developing world; and Lhomon Society, which promotes sustainable development in Bhutan through education.

Rinpoche is the author of several books, including: What Makes You Not a Buddhist (2006), Not For Happiness (2012), The Guru Drinks Bourbon? (2016), and Poison is Medicine: Clarifying the Vajrayana (2021), and has garnered renown inside and outside of the global Buddhist community for the feature-length films he has written and directed: The Cup (1999), Travellers and Magicians (2004), Vara: A Blessing (2012), Hema Hema: Sing Me a Song While I wait (2016), and Looking For A Lady With Fangs And A Moustache (2019).

Buddha’s teaching is like a Lion’s Roar, “Simhanada,” the only danger to a lion is the decay from within. And to prevent this it is essential for the authentic teachings of the Buddha to be studied and practiced with a vast attitude.

From a simple export value perspective, compare the quality of India’s rich Buddhist heritage and the respect it commands worldwide . . . it is the greatest creation it has ever produced—the stainless teachings and wisdom of Gautama Buddha. — Dzongsar Khyentse Rinpoche