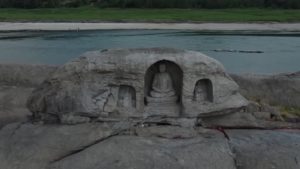 When outdoor enthusiast Gu Yunfeng heard that a once-submerged island had emerged in the Yangtze River, housing three Buddha statues, he decided to go swimming to see the 600-year-old Buddha statues. .

A plummeting water level in the Yangtze River in the southwestern Chinese city of Chongqing has revealed a statue believed to be 600 years old, state media Xinhua reported.

The three statues were found on the highest part of the island reef called Foiliang. It was initially identified as being built during the Ming and Qing dynasties. One of the statues depicts a monk sitting on a lotus pedestal.

Yangtze River water levels are dropping rapidly due to drought and heatwaves in southwestern China.

Unprepared, Gu came to the river bank to visit the statue, but found he had to swim.

“I’m here to see it because I don’t think we’ll see it again when the water levels return. This is the culture our ancestors left for us.”

After about 20 minutes, Gu reached the shore of the island safely. He lost his shoes in the torrential current and had to walk over hot stones with his shirt wrapped around his legs as temperatures soared to 45 degrees Celsius (113 degrees Fahrenheit).

When he swam back to his waiting wife, he was exhausted. I think it’s a warning for

As many as 66 rivers across 34 counties in Chongqing have dried up, state broadcaster CCTV said on Friday (19 August).

In Europe, weeks of drought across the continent have revealed long-sinking treasures.

In Spain, archaeologists are delighted with the appearance of a prehistoric stone circle dubbed ‘Spanish Stonehenge’. Another of Europe’s great rivers, the Danube, has exposed the hulls of more than 20 of her German warships sunk during World War II near the Serbian river port town of Prahvo, at their lowest level in nearly 100 years. down to one of her.