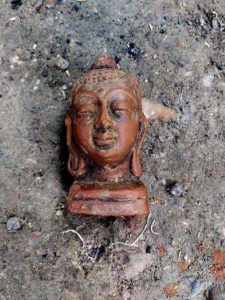 Lucknow: Residents of Mahpur village in Gondhwakot area of Mau district were taken in for a surprise on the misty morning of December 13 when they came across terracotta artifacts including pottery, a Buddha head and a coin hoard which surfaced from a mound being dug up for the ongoing Purvanchal Expressway construction work.

The expressway is barely at a stone’s throw away from the mound. While initial estimates were that the material belongs to the Kushan period, state archaeology directorate’s regional officer for Varanasi, Subhash Chandra paid a visit to the spot on Thursday.

“Upon inspecting the site and after taking a look at the material unearthed including pottery, terracotta pieces, bricks and coins, the antiquity can be pegged from third Century BC to 12 Century AD. This means that the historical landscape of the place covers layers of Maurya, Sunga, Kushan, Gupta and subsequent rulers,” Chandra told TOI.

In his report to the state culture department, Chandra has recommended that the material be handed over to a museum while a part of it may be used for scientifically establishing its age. He has also urged the government to commission a detailed project for the area.

A locally significant Buddhist committee, Buddhankur Bhimjyoti Samiti has also written to the state government and Archaeological Survey of India to save the place.

“Some coins and figurines were recovered from another side of the mound about 15 years ago. Our elders had then raised a demand for its protection but nothing happened. Now this second incident has strengthened the belief that the place is archaeologically important. Thus, we have reiterated our demand,” said a faculty member in sanskrit department at the Government PG College, Rakesh Kumar, who is also associated with the society.

Asked to comment on the antiquity of the place, Chandra said: “the place has been excavated several times. The initial work was undertaken by the British. Thereafter, Rahul Sankrityayan drew inspiration from the site. Several research papers and doctorates may also be linked to the place. In short, yes the place is an archaeologically rich site.”

Meanwhile, district magistrate Amit Bansal stopped the digging work, besides telling the local officers to demarcate the place. He also instructed preparation of an inventory of the material obtained and placed it into safe custody.